Unless you’re covering monster mileages, the choice is obvious here... 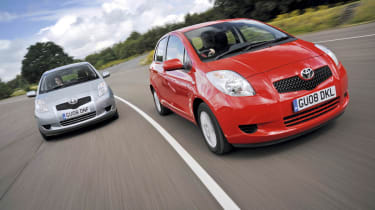 The smaller the car, the bigger the calculations – that should be the mantra of every new car buyer. Snap up a supermini and low running costs will be a priority, meaning you need to get your sums right if you want to maximise savings.

The red car you see in these pictures is our own long-term diesel-powered Toyota Yaris, and in our hands, the versatile Japanese hatch spends most of its time in the urban jungle. So, with this in mind, would we have been better off plumping for the equivalent petrol-engined model?

Both the cars you see here are in identical, mid-range TR specification, but it’s the 86bhp 1.3-litre petrol version that will immediately catch the eye of budget-conscious motorists. At £10,545, it undercuts the 88bhp 1.4 D-4D by a significant margin of £1,000.

However, the oil-burner strikes back with an impressive combined fuel consumption figure of 62.8mpg, bettering its rival by 15.7mpg.

This means that over the course of 12,000 miles, you’ll pocket fuel savings of £283. However, even this significant figure isn’t enough to immediately offset the higher purchase price. In fact, we were staggered when our calculations revealed that you’ll have to hold on to the D-4D for three-and-a-half years – or cover more than 40,000 miles – before you break even. In the real world it will probably take even longer, as many superminis rarely travel 12,000 miles in a year.

On the plus side, private buyers will claw some back when it’s time to tax their motor. With CO2 emissions of only 119g/km, the diesel falls into band B, which results in an annual charge of £35.

Pick the petrol, and your bill increases to £120, thanks to the engine pushing out an extra 22g/km of CO2. So besides road tax, the D-4D struggles to make a convincing financial case for itself. Can it turn the tide in its favour by serving up a superior driving experience? At our private test track, the oil-burning Yaris certainly proved itself to be the stronger performer of the pair.

As with all of our diesel challengers, the Toyota used its superior torque to great effect. Between 50-70mph it posted a time of 11.8 seconds, chopping 4.3 seconds off the petrol car’s time.

By combining this mid-range pace with a taller top gear, Toyota’s engineers have turned the Yaris D-4D into a surprisingly relaxed motorway cruiser.

However, the figures only tell half the story. While the 1.4-litre diesel engine gives the Yaris a decent turn of speed, it isn’t a particularly refined unit, and feels strained at high revs. On the other hand, the smooth-spinning 1.3-litre VVT-i petrol motor is a much better match for the pocket-sized Yaris.

When sprinting between traffic lights and zipping over roundabouts in its natural urban environment, the engine feels much more responsive, combining perfectly with the slick-shifting five-speed gearbox. Get out of the city and on to twisty B-roads, and both the cars behave in a similar fashion. The Yaris lacks the dynamic polish of rivals such as the Renault Clio, though. There’s plenty of body roll, while the ride can be upset by bigger bumps and the lightweight steering lacks feedback.

Is it petrol or diesel then that scores the first victory in our giant fuel face-off? The oil-burning Yaris gives a great account of itself, thanks to excellent fuel economy and strong performance. Sadly, these qualities aren’t enough to counter its higher list price and the lengthy break-even period – especially as small cars generally cover lower annual mileages.

So the opening round in our challenge goes to the petrol contender – it’s a better car to drive and, for most motorists, it will be cheaper to run. In fact, this is true of most superminis. No matter which you choose, the likelihood is that it will be the one that pulls up to the green pump which will prove most cost effective.