Sharper looking and more agile, Merc is a strong choice 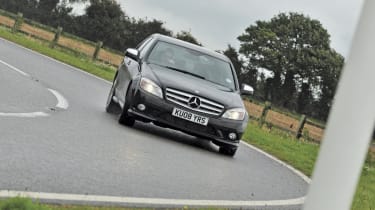 tereotypes dictate that Mercedes’ C-Class is the steady, mature choice in the compact executive sector. To combat this, the company offers the latest model with two distinct noses. And helped by its more aggressive bumpers, chrome touches and shapely headlights, the Sport variant looks glamorous and aggressive.

It’s certainly far more modern than the Jaguar, although parked next to high-spec versions of the Audi and BMW, the black C320 appears a little low-key.

Unfortunately, while it’s well put together, the Mercedes’ cabin design lacks flair. The shapes and materials are closer to an A-Class than an S-Class, while the switchgear, dash and dials can’t match the A4’s upmarket feel. Piano black trim and chrome detailing restore some class to the Sport’s interior, while even entry-level cars get a central COMAND cabin control knob. Specify the optional sat-nav, and this is complemented by a pop-up colour dashtop screen.

The driving position isn’t quite as comfortable as the BMW’s, as the seats lack side support and the wheel is large. There’s enough room in the back for two adults, but as in the 3-Series and A4 the transmission tunnel takes up space. The C-Class’s boot is smaller than its German competitors’, although there’s more room than in the Jag.

In terms of torque, the Merc’s 3.0-litre diesel falls directly between the Audi and BMW, with a 510Nm output. But a power figure of 224bhp only betters the Jag. This doesn’t seem to matter on the road, where the CDI unit delivers gutsy performance. The C320 matches the Audi’s 6.5-second 0-60mph time, and in kickdown its responses are only a couple of tenths slower than the BMW’s. Where the Merc lags behind the 3-Series is with its gearbox. The seven-speed transmission doesn’t work as well as the BMW’s auto. The response from the C320’s paddleshifters isn’t as fast in manual mode, and even when driving in auto it searches for gears a little too often.

And while refinement is good, the Mercedes V6 drones at low revs and isn’t as smooth as the 330d when accelerating. It also trails the BMW in the handling department. The latest Mercedes lacks the agility of the 3-Series and doesn’t have the composure of the four-wheel-drive Audi.

Neither is the ride perfect. On motorways the C-Class scores well for cruising comfort, but the suspension gets unsettled on bumpy roads. What sets the Merc apart is that it has the sector’s best residual values. Can this make up for shortcomings in other areas?

The Mercedes isn’t as expensive to buy as the BMW and comes with an auto gearbox as standard. Yet as it puts out so much CO2, it’s the most costly company car – it sits in the 29 per cent bracket, while the BMW is in 23 per cent. Plus, road tax is £210 a year. Servicing prices are comparable to the BMW and Audi’s, while the 46.4 per cent residuals are the best in this test. But strangely, the Mercedes is more expensive to insure than its competitors.