Is ageing saloon still a worthy contender in this market? 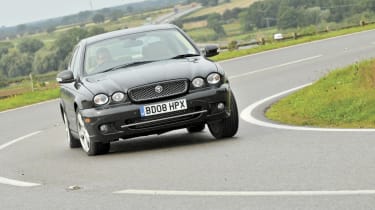 You could be forgiven for wondering if the X-Type is worthy of its place in this test. The shape has barely changed in seven years, and it’s now much smaller than its compact executive rivals – and much cheaper, too.

However, a recent facelift means it deserves to be put through its paces again by our team. Even after a raft of upgrades, the Jaguar seems dated in one of the most advanced market sectors. Our Sovereign doesn’t have the performance saloon looks of its rivals, either, although lesser Sport trim gives a more aggressive finish.

Inside, the model’s age is even more apparent. While the XK and XF showcase Jaguar’s superb new cabin design, the X-Type is short on space and the driving position is cramped. With an upright dash, ageing switchgear and materials that aren’t a patch on the Audi’s, the interior simply doesn’t feel special. The shortest wheelbase here results in tight rear leg and headroom, and while the back seats split and fold, the 452-litre boot is shallow and suffers a lot of wheelarch intrusion. The Jaguar is the least practical car in this test.

It also has far less power than its rivals – which is reflected in the price. The 153bhp 2.2-litre four-cylinder is the biggest diesel engine available in the X-Type. Unsurprisingly, it can’t match the performance of the six-cylinder oil-burners. Its 360Nm torque output is a huge 160Nm down on the BMW’s, so we weren’t surprised by its 10.6-second 0-60mph time – 4.4 seconds slower.

The difference in pace is most obvious when the auto is in kickdown. In fact, the X-Type takes exactly double the time of the 330d to accelerate from 30mph to 50mph. Given the car’s smaller output you’d expect the Jag to trail in terms of performance, but what’s harder to forgive are the woefully outdated and uninspiring dynamics. The only front-wheel-drive model here, the X-Type was criticised for its lacklustre handling at launch, and unfortunately its ever-improving competitors have only brought its shortcomings into sharper contrast. There’s too much body roll when cornering, while the pitch and dive under braking and acceleration make the car tiresome on all but a relaxed cruise.

The steering is vague and the brake pedal soft. Plus, despite the comparatively small power output, the front wheels give up their traction all too easily. Unfortunately, the X-Type’s dynamic failings are apparent at all speeds, and even on the motorway the dampers don’t isolate imperfections in the road surface particularly well. Regardless of the recent updates, then, the X-Type is clearly ready for retirement – it’s undoubtedly a 20th century vehicle in Jaguar’s 21st century line-up.

Price: £30,450Model tested: Jaguar X-Type 2.2D autoChart position: 4WHY: It’s the oldest car here, but X-Type has just had a facelift and has a strong brand image.

it’s the cheapest of this quartet to buy, but ownership costs for the Jaguar are not as appealing. After three years, it’s likely to be worth only 37.5 per cent of its price new – the worst here. It’s also the only model to have fixed service intervals. The Jag’s first check-up is needed at 12,500 miles, and the initial three services come to just over £100 more than three years’ BMW maintenance. The low price would mean a cheap company tax bill, if it wasn’t for the 184g/km emissions.