Bigger, better, but is our current class favourite still the best? 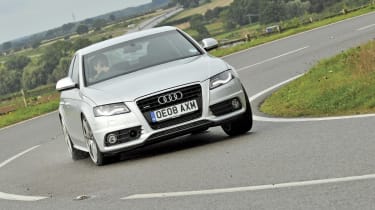 Now in its eighth incarnation, the A4 has long been a compact exec front-runner. Even though the car has been a sound alternative to a BMW or Mercedes for years, only the latest version won us over with enough conviction to take class honours. Will its victory be short-lived?

While its shape is pure Audi, the model has grown in size and stature. It’s longer, lower and wider, and its styling has a sharper edge that makes the A4 less about fitting in and more about making a statement. It has the longest wheelbase here, giving a spacious interior. Rear legroom is class-leading and the 480-litre boot is the biggest of this quartet, while folding seats come as standard, unlike in the BMW and Mercedes.

Crucially, the A4 hasn’t only got bigger; its quality is better, too. Attention to detail is tough to beat, putting the cabin on a par with the class above. Features such as the Multi Media Interface (MMI) control system and electric parking brake are standard, while in S line trim you get a sporty wheel and gearlever as well. Add a superb driving position and the cabin is hard to fault.

And don’t think the luxury feel won’t last once you’ve left the showroom. The V6 TDI not only matches the BMW for refinement, but it’s gutsy, too. The engine is quiet, and delivers its power smoothly and quickly. It has fractionally less torque and power than the 330d, and an extra 30kg of weight to carry, so the A4 was three-tenths slower from 0-60mph, with a time of 6.5 seconds.

However, the Audi feels equally punchy in-gear, and with the heavy but precise shift it’s easy to make the best of the performance. Four-wheel drive gives excellent grip when cornering, while bypassing the need for traction control when pulling away.

This sense of security and composure carries over to the handling. With superb body control, sharp steering and a positive turn-in, the A4 is involving and agile in a way that previous generations have never been. Our car had the £1,300 Audi Drive Select system that gives you adjustable active dampers and dynamic steering. A switch lets you choose between Comfort, Auto and Dynamic settings, while you can program your own setting via the MMI.

Even without the hi-tech wizardry, the A4’s chassis is impressive, with exceptional cornering composure at speed. Strong brakes are a big plus, too, and even though our car has large 19-inch wheels, the S line Audi has a smoother ride than the BMW. While it’s still firm, it doesn’t fidget as much over bumpy surfaces and is more comfortable on the motorway.

And then we come to the price list. The S line model represents top value for money, and so the A4 is cheaper to buy than either the Mercedes or the BMW. It will be very tough to beat in this test.

Price: £32,700Model tested: Audi A4 3.0 TDI S LineChart position: 2WHY: A well rounded image and superb design have pushed the A4 to the top of the class.

We received similar quotes for servicing the Audi as for the 3’s three-year pre-paid deal, and both cars have variable schedules. But the A4’s higher emissions mean your tax disc will cost £170 a year. It also sits two groups higher than the 3-Series, in the 25 per cent company car tax bracket – so only the cheaper list price stops the A4 being the more costly option. Its biggest advantage is its predicted used value, with a strong 44.9 per cent residual.