When it comes to luxury saloons, the S-Class is a tough act to beat. 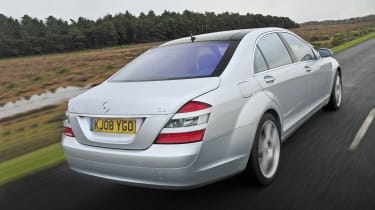 When value for money becomes less important than status, car makers have to pull out all the stops. Buy an S-Class or a 7-Series, and you are sticking two fingers up to the credit crunch – and you will expect the very best.

This concept of absolute excellence was how Mercedes approached its latest S-Class. Having been on sale since 2005, the range has grown to include six-cylinder petrol and diesel models, as well as high-performance V8 and V12-powered AMG variants. We’ve sampled them all, and our favourite is this latest V6 oil-burner.

Take a seat in the rear of our long-wheelbase test car, and it’s hard not to be impressed. The Merc is only 10cm shorter than a Bentley Continental Flying Spur, and the S-Class offers more legroom than you could ever need, while the seats are fit for a private jet.

Once on the move, the sumptuous feeling continues, thanks to the S-Class’s unparalleled ability to smooth out the road surface. Potholes that would shake ordinary executive saloons to the core feel like minor imperfections in the tarmac.

raffic-calming speed humps become a temporary interruption, rather than an uncomfortable obstacle. The feeling of invincibility is also felt from the driver’s seat. Unlike the BMW, the S-Class seems to shrink around you, and never feels too big to slot down busy city streets. It’s only when you reverse into a parking bay that you become aware of its colossal 5.2-metre length.

Other drawbacks to the Mercedes include a lack of straight-line pace when compared to the gutsy 7-Series. At the test track, the S-Class managed the 0-60mph sprint in exactly eight seconds – two-tenths behind the 730d. At least the Merc’s brakes are impressive, hauling the huge saloon from 70mph to rest in only 45.8 metres.

But it’s clear that hard driving is not what the S-Class is about. The engine is superbly refined when cruising, and it pulls only 1,600rpm at 70mph. Head away from the motorway and on to a twisty A-road, and the German saloon is amazingly agile for its size. The nose is more likely to push wide when tackling tight corners than the sportier BMW’s, but few will have any complaints with the S-Class’s dynamics.

The steering is heavily assisted, which makes light work of any manoeuvres, yet there is little feedback provided when the wheel is turned at speed.

Picking faults with the S-Class isn’t easy, but one area where we could suggest some improvements is on the price list. Our long-wheelbase diesel version costs £59,885, but you can save £4,000 by choosing the standard model.

That still means the Merc is £1,725 more than the BMW, though. However, drive the S-Class, and you get the impression it represents the pinnacle of Mercedes engineering. Bettering this would be a massive achievement for BMW...