Flagship luxury cruiser gets a more conservative look, while occupants can play with a raft of hi-tech kit 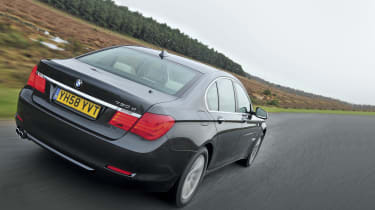 It wasn’t the accolade BMW wanted, but when the previous 7-Series was launched in 2002, it immediately became one of the most controversial designs of the decade.

The striking looks of the range-topper managed to turn off as many buyers as they won over, and were at odds with the more elegant and conservative lines of luxury rivals such as the Mercedes S-Class.

So, bosses at BMW have taken a more subtle approach with the latest version of their hi-tech flagship. The nose features the trademark BMW double kidney grille and quad headlamps, while the restrained rear end has more than a hint of Lexus LS in its design. But to our eyes, the resulting shape is now too understated, and the 7-Series lacks the imposing presence of the Merc. Things begin to improve once you climb aboard, however. Like S-Class owners, buyers of the big BMW will spend most of their time travelling in the rear.

And occupants won’t be struggling for space in the back, as even in this short-wheelbase variant, the 7-Series serves up plenty of head and legroom.

The fit, finish and materials in the cabin are all out of the top drawer, too. Leather trim covers the seats and doors, subtle dark wood features on the dashboard and there are no brittle plastics to be seen.

Get behind the wheel, and it’s clear BMW wanted to give its range-topper a sporty feel. The clearly laid out dash is angled towards the driver, and you sit lower than you do in the S-Class.

This impression is reinforced on the road, where the flagship BMW displays incredible agility, slicing neatly through bends. Pay £1,170 for the optional four-wheel steering and grip and composure are increased even further.

elect Sport+ mode on the Drive Dynamic Control – Comfort, Normal and Sport settings are also available – and the dampers are firmed up, while the traction control is less intrusive, resulting in even sharper dynamics.

The BMW also has the performance to back up this sporting character. At a wet test track, it blasted from 0-60mph in 7.8 seconds. The slick-shifting six-speed automatic gearbox adds to the car’s appeal. It responds quickly, despite lacking the steering wheel-mounted paddles found on the Mercedes.

However, the BMW’s sporting nature is also its Achilles’ heel. Even when set to Comfort, the ride is firm and lacks the supple nature of the air-suspension set-up found on the S-Class. It’s not as quiet as its rival, either, with more wind and road noise making it into the cabin.

On the plus side, the 7-Series will save owners a chunk of cash. Not only is it cheaper, but BMW’s EfficientDynamics means it’ll be less costly to run. Value isn’t always a top priority in the luxury class, although the savings will be welcome for 7-Series buyers.

Price: £54,160Model tested: BMW 730d SEChart position: 2WHY: All-new 7-Series aims to set a new standard as one of the best cars in the world with hi-tech kit and sharp handling.