It’s been around – and at the top – for a while. Can it see off newcomers? 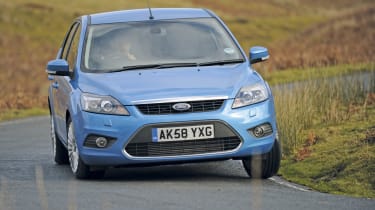 No practical hatchback test would be complete without the Ford Focus. Ever since the second-generation model was introduced in 2004 it has been one of the most popular cars in the UK, consistently topping the sales charts – and Auto Express rankings.

It’s not hard to understand the Ford’s success. Practical, well built and with handling that many hatches can only dream of, it satisfies the needs of both families and keen drivers. However, time is now starting to catch up with the Focus, and newer rivals are ready to topple the blue oval favourite.

Despite a facelift earlier this year, the Focus looks dated in this company. Swept-back Mondeo-style headlamps and LED tail-lights fail to disguise the car’s old-fashioned upright styling and fussy detailing. It certainly can’t match the Honda or Renault for visual impact.

Inside, the design has stood the test of time more successfully. While it lacks the premium feel of the Golf, the cabin is well screwed together and spacious. The driving position is perfect and the subtly bolstered sports seats are extremely comfortable. Hunt around and you will find some cheap-feeling plastics, but it’s the lack of standard kit that detracts most from the interior atmosphere.

When it comes to versatility, the Focus simply can’t match the Civic. With 358 litres of carrying capacity, it trails the Japanese car by a significant 127 litres. However, the rear bench does fold completely flat, increasing luggage space to a useful 1,247 litres.

It lacks ultimate versatility, but the Ford came into its own at the test track. The mid-range urge of its 135bhp 2.0-litre diesel engine was particularly impressive: the car took only 9.0 seconds to sprint from 50-70mph in sixth gear, four-tenths of a second quicker than its nearest rival. It performs well at the pumps, too, matching the Golf’s figure of 35.5mpg.

But in the real world, the Focus’s powerplant is the least impressive of our quartet. Under hard acceleration it is coarse and unrefined, while the clunky six-speed gearbox further hampers progress.

This is a real shame because it spoils the otherwise peerless driving dynamics. No other car here can match the fine ride and handling balance of the agile Ford.

Turn into a corner and you’ll discover well weighted steering, great poise and strong grip. Better still, the Focus glides over the sort of broken surfaces that leave Civic and Mégane owners a little shaken.

However, the Ford does have a major Achilles Heel: its price. At £19,036, our range-topping Titanium is simply too expensive. Choose the more desirable Golf with a manual box and you’ll not pay much more; pick the identically equipped Renault and you’ll save more than £1,500. Worse still are the Ford’s residuals, which at 34.5 per cent are the lowest of our contenders.

There’s no doubt the Ford is the first choice for driving fans, while its cabin is practical and comfortable. But the cracks are now starting to show in the blue oval model’s once unbeatable package.