Current class leader still makes a compelling case for itself. 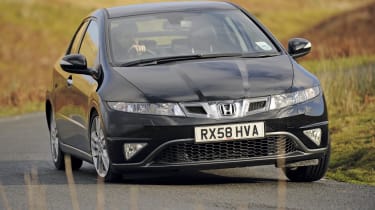 Family cars don’t come much better than the Civic. The futuristic model is our reigning New Car Honours champion in the compact hatchback sector. Yet Honda isn’t resting on its laurels. To meet the challenge of newcomers such as the VW Golf and Renault Mégane, the Japanese firm has tweaked its popular hatchback.

From the outside, the only major difference is a new grille, which now features a pair of intakes either side of the Honda logo. Revised rear light clusters also help to provide a fresh look, but otherwise the Civic retains the space-age shape and stubby proportions of the old car.

It’s the same story inside, too, so the cabin continues to split opinion. People either love or loathe its futuristic layout – although nobody can deny the switchgear has a quality feel. Unfortunately, the driving position is still flawed, as the seat doesn’t lower far enough for all motorists to get comfortable behind the wheel.

Trim levels have been brought into line with the Accord, and EX GT spec includes climate control, a panoramic sunroof and integrated sat-nav all as standard. What the Civic has in abundance is practicality. The huge 485-litre boot is 113 litres larger than the Mégane’s, the next biggest of the cars on test, and you get Jazz-style fold and tumble rear seats. It’s the only model here with such a versatile cabin, making the Civic easily the most practical choice.

The Honda also has more capacity than its rivals under the bonnet, thanks to the 2.2-litre i-CTDi engine. A power output of 138bhp matches the 2.0-litre Golf’s, but its 340Nm torque rating ranks it ahead of all three rivals. And the Civic makes the most of its advantage, too: at the test track it was the fastest from a standstill, racing from 0-60mph in 8.8 seconds – seven-tenths-of-a-second quicker than its closest competitor.

The diesel engine revs smoothly and quickly with little turbo lag, but it lacks immediate punch when you floor the accelerator. Instead, you have to use all of the revs, which explains why the Honda’s dominance doesn’t extend to the in-gear test times: it was slower from 30-50mph in fourth gear than all of its rivals. On the road, the Civic is more at home on twisty country lanes than on motorways. Its agile handling, precise steering and firm damping combine with its petrol-like power delivery to make it an entertaining drive. However, its hard suspension doesn’t deal with ruts and potholes as effectively as in the Focus or Golf, and it lacks the refinement of its rivals. As a long-distance companion, it soon becomes a drag.

The top-of-the-range Civic looks expensive, yet it comes with generous standard kit. Honda’s excellent dealer network, plus the car’s strong resale values and good fuel economy, ensure it puts up a strong defence of its crown.

Price: £20,500 (est)Model tested: Honda Civic i-CTDi EX GT 5drChart position: 2WHY: Our reigning champ has received some minor tweaks – and is the car to beat here.