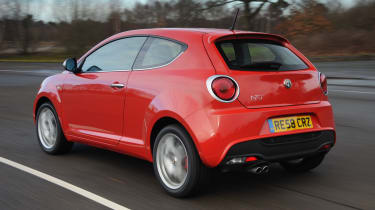 NOT since the demise of the 145 in 2001 have Alfa fans been able to buy a small hatchback.

The MiTo name is derived by combining the place of the car’s design (Milan) with the city of its construction (Turin, or Torino in Italian). Enthusiasts will want to know whether it’s a modern-day Alfasud, but all the new Italian really needs to do is beat the all-conquering MINI.

As with its rival, the Alfa takes its cues from an existing model – only this time it’s a supercar providing the inspiration. The teardrop headlamps, telephone dial alloys and distinctive front air intakes are pure 8C Competizione.

But the end result isn’t the natural beauty you might expect. The bulbous front end is ungainly, although the squat stance and sweeping profile are eye-catching. It’s most appealing from the rear, where a diffuser-style bumper and LED light clusters ensure following drivers get the best view.

The more conventional cabin is attractively laid out, with a smart centre console and neat instruments. The driving position is excellent and the switchgear is high quality. Flagship Veloce trim also brings luxuries such as digital climate control and Bluetooth.

In the back, there’s space for two adults to sit in moderate comfort, but legroom is tight. Plus, while the 270-litreboot is much bigger than the 160-litre MINI’s, its high load lip and single-piece folding rear bench compromise practicality. You don’t buy either of these cars for their storage space, though, so how does the Alfa measure up on the road?

Buyers can choose 95bhp or 120bhp versions of the 1.4-litre engine, but the flagship 155bhp turbo we tested thrives on revs. With 230Nm of torque, it provides punchy acceleration and feels every bit as fast as our figures suggest.

The 0-60mph sprint took only 8.1 seconds, leaving the MINI trailing by 1.3 seconds. The MiTo is also terrific fun to drive, with direct steering and a bassy exhaust note. Ultimately, though, it doesn’t have the grip or finesse of the MINI. The Alfa’s gearshift also has a long throw, the steering lacks feedback and, while the brakes are effective, the middle pedal feels artificially hard.

When you do overstep the mark, the MiTo’s ESP stability system is less consistent in its reactions than the MINI’s. Ride comfort and refinement are both on a par with its rival, though, and drivers can fine-tune the experience thanks to Alfa’s new DNA system. It provides Dynamic, Normal and All weather modes via a switch on the centre console that adjusts the throttle responses, steering feel and damper settings.

At £14,661, the Veloce offers a convincing blend of pace and kit – go for cheaper variants and you can get MiTo thrills on an even tighter budget.

Chart position: 2WHY: With its all-new small hatch, Alfa aims to match the desirability of its British rival.