Is time finally catching up with rally-bred performance star? 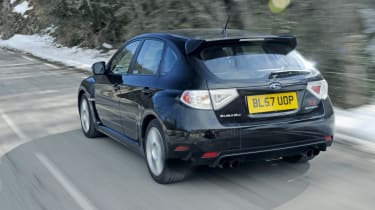 If RS means everything to fast Ford fans, then STi is the hallowed badge for followers of the Impreza. Having featured on some of the most capable high-performance models on sale over the last two decades, the STi tag carries genuine kudos. But has its appeal slipped in recent times?

In hatchback form, the Impreza has undoubtedly lost some of its aggression. The bodykit and rally-style alloys improve the appearance, yet purist Scooby fans will still prefer the classic four-door shape.

The interior is also lacking in style. While the dashboard has more swoops and curves than ever, the Impreza’s cabin is still plagued by cheap plastics and too many switches. There’s no knocking the practicality, though, thanks to the versatility of having five doors and decent rear legroom. But this is not a key consideration for the average STi buyer – this is a car designed to thrill. With 296bhp, the Subaru is close to the RS in terms of power, while those with more to spend can go for the 325bhp 330S.

With Subaru’s latest 2.5-litre turbocharged engine under the bonnet, the STi does without the loud burble of its 2.0-litre predecessor. Once on the move, the unit doesn’t have the character of the RS’s five-cylinder – but it has its pace.

We managed an amazing 0-60mph sprint time of only 4.7 seconds, putting the Subaru way ahead of its rivals. Strangely, it doesn’t feel so fast in everyday driving.

To achieve the sort of launch off the line you need to leave the competition behind, you have to be brutal with the clutch. In reality, pulling away smoothly at any speed is tricky, as the laggy engine doesn’t seem to gel with the clunky six-speed gearbox. The Impreza has one key difference to its rivals here: four-wheel drive. With an adjustable centre differential, the driver has the opportunity to change the way power is distributed, yet the MINI and RS still deliver more in the way of fun.

While it has the most grip and is capable of carrying high speeds through tight corners, the Impreza isn’t particularly involving. The light steering offers little feel, and the chassis doesn’t shine until it’s driven at track-day speeds. In the dry at least, the Subaru gleans little advantage from its all-wheel-drive set-up.

The latest hatchback-bodied Subaru lacks the charm and brutal appeal of its predecessor. Like its more costly Mitsubishi Evo X rival, the Impreza has tried to become more refined to attract a wider audience.

As a result it looks expensive in this company, at £26,040 in basic form. Add hefty annual running costs and less immediate driver appeal, and you can be certain of one thing – Subaru won’t be celebrating the arrival of the Focus RS.

Chart position: 3WHY: Why? Four-wheel drive should give the Subaru the traction it needs to get ahead.