Does stunning new hot hatch live up to the legend? 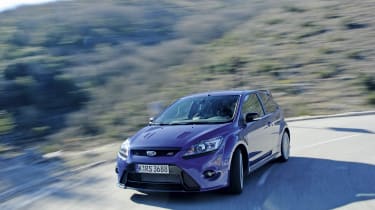 6
Buy used for less at Buyacar

Big spoiler, an aggressive grille and a beefy bodykit – this is an RS of the old school! The designers at Ford set out to give their latest performance giant an aggressive appearance, and they have clearly hit the nail on the head. What we need to find out now is whether the driving experience can live up to the hype.

The newcomer comes with a keyless start system as standard, so all you do is press the ‘Power’ button next to the gearstick and listen to the turbocharged five-cylinder engine rumble into life. The unit is based on the same powerplant that you’ll find in a Focus ST, and it started its life in a Volvo. However, as nearly all the major internal parts have been replaced, don’t expect the driving characteristics of a Swedish estate...

Slot the six-speed gearbox into first and prepare for lift-off! With 301bhp being fed through the front wheels, you would anticipate leaving a haze of tyre smoke behind you. Yet if you’re on a dry road and take care with the throttle, this isn’t the case.

Even though the engine’s full torque isn’t delivered in first to help preserve the transmission, acceleration is brutal. Once into second, the Focus launches forward like a supercar. Every lift of the throttle is accompanied by a twitter from the turbocharger and a pop from the enormous twin exhaust pipes. The aural treats have been engineered to be louder than they need to be, and they certainly add to the drama.

So far, so good, then. But here’s the acid test: how does the RS tackle a series of fast hairpin bends? The answer is with amazing agility. Tipping the scales at 1,467kg, the newcomer weighs 75kg more than the ST – that’s similar to carrying an extra adult passenger.

Yet the RS is much more capable than the lesser model through corners. There’s no shortage of grip, with the nose tracking around bends rather than pushing wide.

Even more impressive is the way the RS’s advanced front differential works with the clever new RevoKnuckle suspension set-up. Ford was determined to prevent the car tugging wildly off-line when cornering (a movement commonly known as torque steer), so it came up with this system, which effectively counterbalances the cornering and acceleration forces.

We should point out here that our test route was over smooth, predominantly dry tarmac. In these conditions, we didn’t think the lack of four-wheel drive held the Focus back. Although you can feel the steering weight up to one side if you get on the power mid-corner, direction changes are kept to a minimum. What’s more, the driver is always aware of exactly what the front tyres are doing – this kind of feel through the steering wheel is sadly lacking in the Subaru.

As you charge between tight corners, driving the RS is a wide-eyed experience – but is it as much fun as the MINI? That depends on your expectations. The British-built hatchback is lighter, and changes direction more readily. Plus, it tightens its line more obediently if you lift off the accelerator mid-corner. On a track, the devastating performance and grip will make the Ford comfortably quicker, although the MINI retains the feel of a more fun-loving hot hatch.

The key to the RS’s pace is the immediate response of the engine. The powerplant’s pulling power is consistent across the rev range, so rather than rising to a frantic crescendo as the Subaru does, this latest Focus’s acceleration is incredibly efficient.

So, has Ford created the perfect performance machine? No. As with all the great RS models of the past, this Focus is not without its flaws.

The first is its economy and emissions. Ford claims combined returns of 30mpg and a CO2 output of 225g/km, which are little worse than the ST. However, getting close to these figures in the real world would be virtually impossible.

We didn’t have as long with the Focus as the other cars here, so were unable to carry out a comprehensive economy test. But when it was being driven hard along mountain roads, the trip computer dropped to 11mpg. As we cruised through towns at the end of the day, this figure rose to only 14mpg... Topping 20mpg as an annual average could be a challenge. At least Ford has got the price spot-on. From any angle, the Focus RS looks the business, and the full bodykit is part of the £24,995 package. Standard kit inside includes the racy Recaro seats, air-con and keyless go, although you will have to pay £395 extra for our test car’s blue paint.

So far, we’ve only had the chance to spend a day with a German-spec left-hand-drive Focus RS, but we’re already smitten. The next challenge for the new performance model will be to pull off a similar trick on bumpy, damp and slippery British B-roads. Will we then be crying out for four-wheel-drive traction? Possibly.

However, the firebreathing RS easily lives up to the legend – and it’s set to be a surefire hit among fast Ford fans.

Chart position: 2WHY: The latest in a long line of legendary RS models is here to put fast Fords back on top.