Smaller, lighter... is our class champ outmuscled by its big rivals? 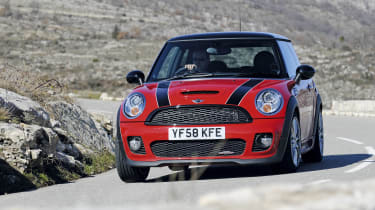 We've seen a flood of hot hatches hitting the market in recent years, so it takes something very special to be crowned Auto Express’s favourite. When we first tested MINI’s John Cooper Works, it blew us away.

Like a true high-performance flagship should, the British-built three-door offers a bigger leap up from the regular ‘warm’ model than you might expect: the Cooper S is entertaining, but the JCW is a riot!

However, parked up in our big league trio of thrillers, the MINI looks like it’s going to be bullied by its bruiser rivals. Even with stripes, large wheels and a central exhaust, the little hatchback appears tiny alongside the musclebound Impreza and Focus.

The MINI fares better inside, where its cabin is the best designed here. While some of the retro details can be a little over the top, the JCW has character to spare. However, in terms of practicality, it is streets behind both rivals. The three-door bodyshell hands the versatility advantage to the Impreza, and the tight rear seat space and small boot mean the MINI is not for families.

The upshot of its smaller size is that the JCW enjoys a significant weight advantage. At 1,205kg, it’s 300kg lighter than the Impreza and 262kg less than the RS.

These are massive differences that really pay dividends on the road. Making do with a 1.6-litre four-cylinder turbocharged engine, the MINI has a relatively lowly 208bhp power output. However, even giving away nearly 100bhp to both rivals, the JCW doesn’t lag as far behind as you might expect…

Our own figures record the MINI’s 0-60mph time at 6.2 seconds. This is just three-tenths behind the Focus’s official claimed time. Only at higher speeds does the JCW’s lower power output become more obvious, with noticeably less third gear urge than its rivals here. But it’s when tucked into a tight corner that the MINI makes most sense. Its superb front differential seems to work harder than the Ford’s, but it still allows you to accelerate out of bends with confidence. The lower weight also ensures the MINI is more alert when changing direction. Its handling is about hot hatch fun rather than raw speed, making it a joy on the road.

In addition, the JCW has the most precise gearchange. Using the six-speed lever, along with the perfectly positioned clutch and accelerator pedals, is very satisfying.

If the MINI can’t win you over on a test drive, it will when you do the sums. Priced at £20,780 in sparsely equipped standard form, it’s nearly £4,200 cheaper than the Ford and much less costly to run. On our demanding test route, the MINI managed only 26.8mpg, yet when cruising, its economy rises well above 30mpg.

Not only is the JCW one of the best cars in its class, it’s one of the most entertaining models on any budget!

Chart position: 1WHY: It’s down on power, but the JCW is the lightest car here and our favourite hot hatch.