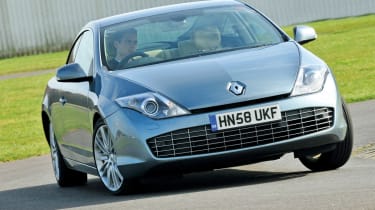 Think a Renault and Audi don’t deserve comparison? Think again. The Laguna Coupé is a worthy flagship for the firm, and has revised some traditional stereotypes about upmarket, niche models from France.

Back in Issue 1,046, the Laguna raised several eyebrows when it finished ahead of VW’s Passat CC. Now can it beat a car from one rung further up the VW Group ladder? Parked next to the A5, Renault’s coupé looks a little fussy. The Audi takes discreet styling to new heights, without the extravagant lines of its rival here. But these are coupés, so why shouldn’t they stand out? The rakish Laguna has a distinctive nose, curvy roofline and a rump that bears a passing resemblance to an Aston Martin, which is no bad thing.

It’s just as extravagant inside, too. Open the huge doors and you enjoy a bespoke, premium feel and bags of standard kit. Everything from sumptuous leather trim to cruise control is part of the package. Flick a few switches and you don’t get the same sense of quality that you do in the Audi, yet the Renault still exudes class.

There’s no option of a self-shifting transmission on the 2.0 TDI A5, while the Laguna dCi GT is fitted only with an automatic box – this offers few advantages, though. Shifts are smooth, but the auto’s relaxed set-up is at odds with the sharp, engaging nature of a coupé. Change gear manually via the lever and you’ll be even more frustrated with the lethargic shifts. At least the V6 diesel engine’s pace is strong, though. With a 67bhp power advantage over the Audi, the Renault dispatched the 0-60mph sprint in 7.3 seconds – 1.8 seconds faster than the A5.

However, refinement is lacking. It’s smooth when cruising, but at idle the V6 vibrates the cabin and at high revs it sounds strained. The handling suffers similar drawbacks. Stiff suspension limits body roll, but the car struggles to cope with broken road surfaces. The advanced four-wheel-steering system makes for scalpel-sharp cornering and huge grip – yet there’s an artificial feel to the steering. While it’s capable of changing direction extremely quickly, the Renault doesn’t reward as much behind the wheel.

Priced at £4,345 less than the A5, the Laguna Coupé starts this duel with a significant advantage. However, our trade experts predict that the Renault will shed £1,353 more than the Audi in depreciation over three years. So which will prove to be the smarter purchase?