With the roof up or down, class leader continues to impress 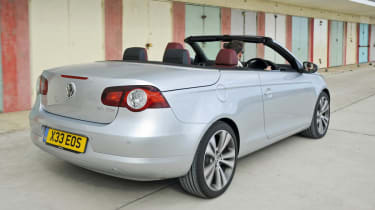 ALL it beginner’s luck if you like, but Volkswagen got its original coupé-cabriolet right first time. Unlike rivals from Peugeot and Vauxhall, the Eos isn’t based on an ordinary family hatch, so the firm’s designers had a free hand when it came to the styling. It is bigger than a Golf yet smaller than a Passat, and the distinctive headlamps, angular lines and wedgy stance set it apart. It’s not compromised by its complex roof – which is rare among CC models. This is because the hard-top’s large centre section is formed from two pieces, so takes up less space when folded. As a result, the Eos is the most stylish car in its class. Open its pillarless doors and the cabin is more sombre than the airy Peugeot’s, with a simple, less visually appealing design. But the quality of the plastics and switchgear inside is excellent, giving a classy feel. Although the Eos’s roof takes longer to fold away than the Peugeot’s, it incorporates a large sliding glass sunroof. This is unique in the sector and provides a welcome compromise if it’s too cold outside for proper al fresco motoring. In Sport trim, the VW weighs in at £23,115 – that’s £1,180 cheaper than the flagship 308 CC. And it shows when you look at the list of standard kit. There’s no neck-warming technology to cut draughts and leather is a £1,300 extra – you don’t even get heated front seats as standard. What the Eos’s cabin lacks in equipment it more than makes up for with space, though – particularly in the rear. While headroom is still tight, adults will be reasonably comfortable on short journeys and children will have plenty of room. As in the Peugeot, though, rear passengers have to contend with serious buffeting at higher speeds with the roof down. The two cars are evenly matched in terms of outright performance, but the lighter VW has more punch than the bare figures suggest. Its racier character comes courtesy of a more positive gearshift and stronger brakes. Our car’s firmer Sports suspension also provides an extra level of composure and fun on twisty roads, with more grip and sharper responses than the less entertaining 308 CC. However, the Eos isn’t as rigid as its younger competitor. This is most obvious with the metal roof folded, as there’s more judder over ruts and potholes in the VW. This isn’t enough to dampen your enjoyment of its more agile handling, but drivers will be able to sense the body movement over uneven surfaces. Still, the Eos emits less CO2, at 148g/km, and this combines with the cheaper list price to make it a more cost- effective choice for company car drivers. Claimed fuel economy of 50.4mpg also leaves the Peugeot in the shade. With its stylish looks, stronger image, sharper driving dynamics and more roomy cabin, the VW makes sense on both emotional and practical levels. But does it deserve to take the win in this test?

Chart position: 1WHY: The Eos is one of the few coupé-cabrios that looks good with the roof up or down. It’s our current class favourite.