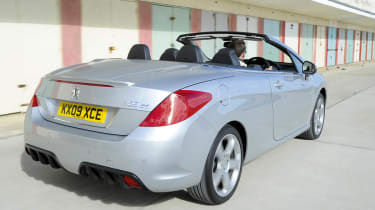 If practice makes perfect, then the 308 CC should hit the bulls-eye – because the new model is the latest in a long line of successful Peugeot coupé-cabrios. And on the outside, there’s no mistaking its 308 roots. The CC follows the template laid down by the hatchback, with swept-back headlamps and a gaping grille dominating the front end.

From this angle, the Peugeot is attractive, but view it in profile or from the rear, and it’s clear to see the difficulty of packaging its roof mechanism. The elongated rear deck and bulbous tail are out of proportion with the rest of the car, and are a direct contrast to the sharp creases of the Eos.

It takes 24 seconds for the 308’s roof to complete its electrical gymnastics – four seconds less than the VW’s – but even with its roof stowed, it still trails its rival for style. Things improve on the inside, where the Peugeot’s neat cabin borrows heavily from the hatch. The trio of circular air vents on the centre console creates a sporty impression, but the angle of the dashboard leaves you a long way back when sat behind the wheel.

We have few complaints about the kit tally. Flagship GT trim includes air-con, cruise control and Peugeot’s new Airwave heating system. The latter is inspired by Mercedes’ Airscarf, and delivers warm air through a neck-height vent in the front seatbacks. Yet while it’s standard on our car, it’s a £1,500 option on other models (in conjunction with leather upholstery) – and we don’t think it’s good enough to justify the extra.

Climb into the rear, and the wheelbase advantage the Peugeot has over the VW hasn’t been put to good use, because legroom is much more restricted than in the Eos. The Airwave system is partly to blame, as it requires thicker seatbacks, which eat into rear space. With the roof up, even average height adults will be stuck for headroom. And the position of the back seats leaves your head pressed against the glass screen, rather than the softer rooflining.

On the road, Peugeot’s coupé-cabrio expertise is obvious, because the 308 CC feels solid. Roof up or down, the rigid chassis resists scuttle shake and flexing more successfully than the VW.

The 140bhp 2.0-litre HDi diesel has a narrow 2bhp advantage over the Eos, but the Peugeot is 68kg heavier than its rival. As a result only one-tenth-of-a-second separated our pair on the sprint from 0-60mph.

In-gear times for the Peugeot were quicker, but the smooth diesel lacks the urgency of the gruff VW unit. A slack gearshift and numb steering also compromise the 308’s dynamics, while softer suspension means it rolls more than the sharper handling Eos.

It’s well equipped, but the Peugeot costs more than the VW, at £24,295. Does it do enough to justify its premium?

Chart position: 2WHY: Peugeot knows what it’s doing when it comes to folding hard-top cars, and the 308 CC promises to be its best yet.