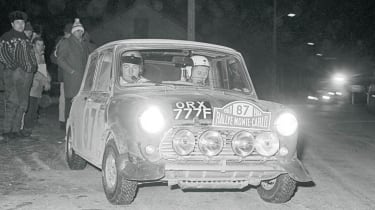 You might not think to look at it, but the Mini is a car steeped in motorsport history. The most famous win of all came in 1964 at the Monte Carlo Rally – widely regarded as the toughest event on the rallying circuit.

Starting at Minsk in Belrus, one of nine starting points across the globe that year, Paddy Hopkirk stunned the opposition by piloting his Mini Cooper S to victory through extreme weather and inhospitable landscapes. This first victory was repeated the following year and in 1967, but it’s the initial win that announced Mini’s arrival on the world motorsport scene, and lives longest in the mind.