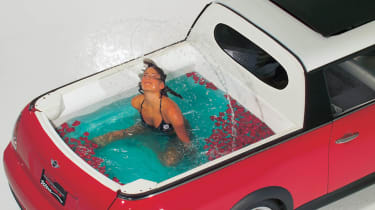 Here’s a one-off MINI that will live long in the memory! The six-metre long, six-wheel MINI made its debut at the 2004 Athens Olympics and was built by a specialist coachbuilder in Los Angeles. To accommodate the elongated shape an extra rear axle has been fitted along with an extra set of wheels.

Inside the cabin it’s as plush as you’d expect a limo to be. Toys include a retractable flat-screen TV, DVD player and a phone in the back so passengers can communicate with the driver. But all that’s trumped by the two-seater jacuzzi integrated into the rear section.