The small car revolution starts with the original Mini... 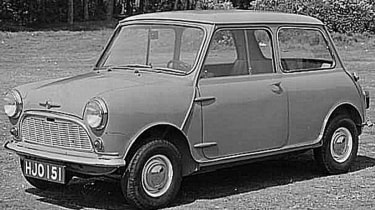 The first BMC Mini went on sale in 1959. Designed by Sir Alec Issigonis, it featured many of the engineering innovations that we now take for granted, such as a tranversely mounted front engine and front-wheel drive. It also featured a clever suspension system, designed by Alex Moulton and was famous for its go-kart handling. Its compact size and fuel efficient engine were a response to the Suez crisis, which saw fuel being rationed in the UK and the first models were sold under two different BMC brand names – Austin and Morris, as the Seven and the Mini-Minor respectively.