Retro concept car paved the way for an all-new Mini... 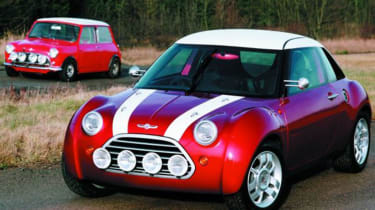 This is the concept car that bridges the gap between the Mini and the new MINI! Revealed in 1997 at the Monte Carlo rally, the ACV30 was Rover's proposal for a next generation version of the iconic small car. With a retro-inspired exterior it was designed under the watchful eye of owner-at-the-time, BMW – and the look was met with a warm reception by German bosses, who had similar plans for a new model. Underneath the coupe-style body, the ACV30 had a mid-engined, rear-wheel drive chassis from the MGF sports car – but while this idea was simply for show, the ACV30's interior was almost production-ready, and when Rover went bust, BMW took the cabin and turned it into a reality. Along with a new Frank Stephenson-styled body.