How many can you fit in a Mini?

Malaysian students prove just how big the Mini really is! 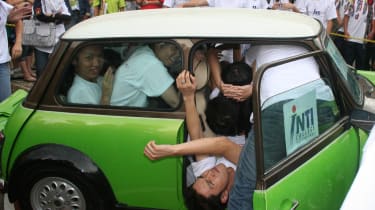 It’s usually a tight squeeze fitting just four passengers in an old-shape Mini Cooper, but back in 2006 a group of Malaysian students managed to cram in 21! The human sardines were from a college in Kuala Lumpa, and the only criteria for taking part was to be over five feet eleven inches tall.

Two squashed into the boot, while 19 others squeezed into the main cabin helped by an organizing crew that positioned each person at the most efficient angle. Once the doors were closed the students had to stay put for a mandatory 20 seconds before the record could be made official. They smashed the previous record set by 18 women in 2000.