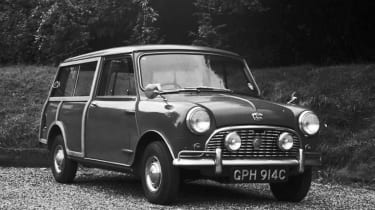 It didn't take long for the Mini range to expand – in 1960 an estate version went on sale, called the Countryman in Austin trim or the Traveller, if it was wearing a Morris badge up front. Sharing the same longer wheelbase as the Mini van and pick-up, it had a decent luggage area and even benefitted from a bench seat that folded flat! A key styling detail – and a big part of the appeal of the Countryman/Traveller – was its van-style rear doors too. Some early versions also came with wood panelling on the outside. The estate bodystyle was revived in 2007 on the MINI Clubman.