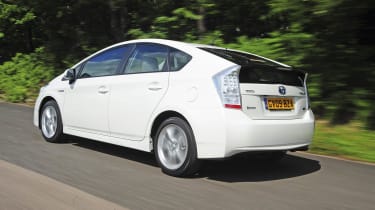 For the past 12 years, Toyota has been refining the Prius – and it clearly didn’t think it was worth tinkering with the styling of the second generation. With its shape honed in the wind tunnel to minimise drag, the new model looks pretty much the same – and very similar to the Insight.

The devil is in the detail, though, and it’s here where the Toyota steals a march on its rival. Distinctive headlamps and a sharper overall look give the Prius a more upmarket presence than the Honda.

We’re comparing the basic T3 here, but the top-of-the-range T Spirit in our pictures gets smart 17-inch alloys, instead of 15-inch rims, and this takes emissions up to 92g/km; the T3 puts out 89g/km.

Climb aboard, and the interior matches the car’s futuristic powerplant. The digital dials are centrally positioned, a head-up windscreen display is standard on all cars and the swooping centre console forms a bridge between the dash and transmission tunnel. High-quality plastics and a simple layout ensure it works well, plus there’s lots of space. A flat floor in the rear gives room for five adults, and there’s a 445-litre boot. It’s not perfect, though – the steering column doesn’t provide sufficient reach adjustment, so tall drivers have to compromise.

Once you’ve got comfortable, there’s a foot-operated parking brake and the tiny, clear-blue plastic gearshifter looks like it’s from an arcade game. Press start, select D and release the brake, and the Prius silently edges forward. Hit the Electric Vehicle button and you can drive solely on zero-emissions electric power at up to 31mph for two miles, depending on the charge in the batteries.

Accelerate hard and the new 1.8-litre petrol engine kicks in, and in normal driving the electric motor assists the petrol unit rather than replaces it. It uses a CVT gearbox so revs are constant as you accelerate, as in the Honda. But the Toyota feels more grown-up. At the test track, it was faster than the Insight and insulated engine noise better. Ride comfort is much smoother, as the Prius deals with bumps better than its rival.

However, the regenerative brakes mean you have to adjust the effort when coming up to junctions – often applying more pressure than expected to come to a halt. Even so, the Prius recorded solid stopping distances at the track. But the transmission’s B mode – which aims to give greater engine braking – made little difference.

While the Toyota won’t match traditional family cars for fun, it is better to drive than its rival. This test is all about emissions and economy, though, and figures of 89g/km and 48.7mpg are impressive. In contrast, the Honda delivers 101g/km and 45.1mpg. The question is whether these statistics justify the Toyota’s £2,880 price premium.

Chart position: 1WHY: Third generation of the original hybrid family car is on sale in August, complete with a bigger engine than ever before.