Toyota says its new Prius, which goes on sale in August, is more eco-friendly than ever. But can it beat the pretender to its hybrid throne, Honda’s Insight? 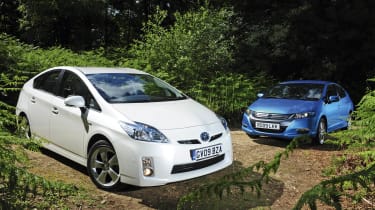 Going green has never been so easy. With more hybrid models available than ever before, the firm behind the first widely available commercial model is fighting back.

The third-generation Toyota Prius is about to hit UK showrooms with the promise of lower emissions, greater economy and a more powerful 1.8-litre petrol engine. But it faces direct competition for the first time. The new Honda Insight arrived in April, featuring five doors and a smaller 1.3-litre petrol unit.

The Japanese company isn’t new to the hybrid game because the original two-seater Insight first went on sale in 2000, and the Civic IMA model is already established in this class. The argument about whether petrol-electric vehicles are a truly green solution to our transport needs continues to rage, but you can’t ignore the benefits of the Prius. It puts out the lowest CO2 of any five-door family car, with a figure of 89g/km.

Despite sharing many similarities, our two hybrids are pitched at very different audiences – and that makes picking a winner difficult.

The Honda is compelling because it offers hybrid technology at a more affordable price than ever before. It’s a genuine alternative to a conventional family car, but the compromises are plain to see in its cheap cabin, bland looks and uninspiring dynamics. Plus, the firm suspension is irritating around town.

While the Toyota is more expensive, it looks smart, has a higher-quality cabin and is more polished from behind the wheel. Thanks to its more complicated hybrid drivetrain, it also delivers superior fuel returns and impressive emissions, and can be driven using electric power alone for short distances. Although the price is high, the Toyota is the best hybrid that money can buy – and it wins this test.