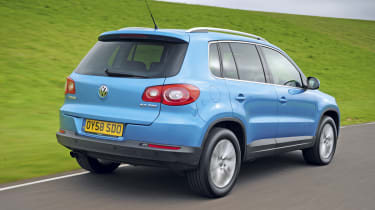 What's the difference between a compact SUV and a crossover SUV? Well, when it comes to the Volkswagen Tiguan, the lines are blurred.

It’s slightly smaller and significantly cheaper than its rivals in this test.

However, with CO2 emissions of 167g/km, it’s one of the most eco-friendly off-roaders on sale, while its four-wheel-drive transmission and the prestige of its VW badge mean it shouldn’t feel out of depth in this company.

Parked next to its rivals, the VW’s compact dimensions are obvious – the Land Rover is 196mm taller. Plus, the Tiguan can’t match the stylish XC60 or classy Freelander for visual impact.

Inside, the driving position obviously isn’t as high, although you still get a great view of the road ahead. The dashboard is lifted from the Golf Plus, which means superb build, attractive design and a car-like feel.

The high-mounted audio and ventilation controls are well placed, while the electric handbrake means there is additional cubby space on the centre console.

You’ll also find cavernous door pockets and under-seat trays for items you want to keep out of sight.

Despite its smaller dimensions, the Tiguan beats the Land Rover for carrying capacity. A sliding rear bench allows you to squeeze in more luggage at the expense of passenger space, although with the seats pushed back, legroom is on a par with the much larger Volvo.

On the move, the Volkswagen is composed and precise. The gearchange and pedals are perfectly weighted, while accurate steering and decent body control mean it handles in a similar way to a car on twisting roads.

The ride is firm, but it’s not crashy, as with the XC60. Traction from the firm’s 4MOTION four-wheel-drive system is excellent, although the common-rail TDI is a little gruff and the power delivery is fairly sudden.

At the test track, the Tiguan’s lighter kerbweight shone through. At 1,590kg, it’s nearly 200kg less than both rivals, and that compensated for its power deficit.

The VW sprinted from 0-60mph in 11.1 seconds – that’s only two-tenths slower than the Freelander.

And while it doesn’t have the straight-line punch of the Volvo, real-world performance isn’t lacking.

For some 4x4 enthusiasts, the Tiguan might be too car-like. But as it’s smaller and cheaper to buy and run than both rivals, it looks a strong choice for SUV drivers who want to reduce their carbon footprint.