SUV has lost its 4WD in pursuit of low emissions. Is it a step too far? 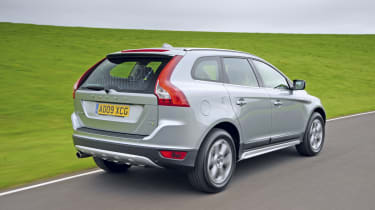 Launched last year, the XC60 is a stylish and well built addition to the compact SUV marketplace. It clearly takes a lot of its inspiration from the successful XC90, but the smaller of Volvo’s off-roaders is still noticeably bigger than the Volkswagen Tiguan.

With its smart lines and sharp styling, though, it’s a real head-turner. Only the subtle DRIVe badge marks this out as an eco model.

Inside, you get a typical Volvo cabin, with comfortable seats and an attractive, well laid out dashboard. In SE Lux models, the ‘floating’ centre console is trimmed in an attractive Nordic light oak finish.

The driving position offers a decent range of seat and steering wheel adjustment and you get a great view of the road.

Overall, the cabin is easy to live with, although the thick A-pillars cause a few blind spots and the sat-nav’s steering wheel-mounted controls are awkward to use.

As the Volvo has the longest wheelbase here, it’s no surprise that it offers plenty of space for passengers. The rear chairs are mounted slightly higher than the front seats, so all-round visibility is good.

Folding the rear bench flat is simple, and frees up a useful 1,455-litre load area. With the seats in place, the XC60’s boot is the longest and widest here.

Yet while the cabin impresses, the driving experience is a mixed bag. The smooth 2.4-litre turbodiesel engine has a characterful growl when worked hard, and is the quietest at idle.

With 173bhp and 420Nm of torque, it’s also the most powerful, so at the test track the Volvo was the strongest performer.

Throttle response is muted, but after a slight hesitation, there’s a sudden surge of power at 2,000rpm and the XC60 has deep reserves of thrust. Not only that, but road and wind noise are well suppressed at speed. However, the slack manual gearbox is a disappointment, and the low emissions come at the expense of four-wheel drive.

For some buyers, it will be hard to see the point of an SUV with zero off-road ability. An efficient traction control system helps to put power down well, but the steering is numb and lacks feel.

Ride quality is also an issue. The Volvo’s suspension thumps over sharp ridges, such as motorway expansion joints.

As you’d expect from the company, though, the DRIVe is packed with safety equipment and feels solid and substantial.

Add this to its unquestionable style and practicality, on top of the lowest emissions here, and the 2WD XC60 is in the hunt.

Chart position: 3WHY: It’s front-wheel drive only, but the XC60 has low emissions and great safety kit.