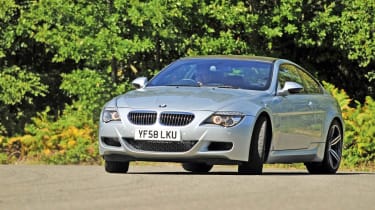 It's more than four years since BMW launched the M6, but the car remains the most expensive model in the manufacturer’s range, as well as the brand’s performance flagship.

Thanks to swollen wheelarches, bold bumpers and quad exhausts, it still oozes aggression. Our example was fitted with the £2,135 Competition Package, which gives an even sportier appearance. Additional bonnet creases toughen up the look, while a lower ride height and wider 19-inch rims fitted with Pirelli P Corsa tyres complete the racy stance. Leaving the carbon fibre roof unpainted is yet another sign of just how honed this motorsport-inspired coupé is.

Further weight-saving measures include a plastic bootlid and front wings, while aluminium is used for the doors and bonnet. Given all this, you’ll be surprised to learn the car is still 15kg heavier than the much larger Panamera. One reason is that, inside, it’s far from being a stripped-out racer. The cabin isn’t as luxurious as the Porsche’s, but it hasn’t dated as much as that of the Mercedes and build quality is hard to fault. The driving position is spot-on, and you get a chunky leather wheel and carbon fibre trim, plus M-branded door kickplates which light up at night. The fully adjustable electric seats offer excellent support and decent comfort, while the simple dial layout is easy to live with.

However, the M6’s unique selling point has always been the hi-tech way it delivers massive performance. The array of buttons next to the gear selector allows you to alter the gearshift speed, switch damper settings and remap the engine to boost power from 400 to 500bhp. In addition, you can use the iDrive control system to programme and save your favourite set-up, which can then be activated by the M switch on the wheel. There’s a head-up display, too, which shows speed, revs and sat-nav directions.

Despite all of this, at the heart of the M6’s pace lies a mighty engine. The big V10 has a slightly diesel-like clatter when cold, but it loves to rev, with the limiter not cutting in until 8,250rpm. In-gear performance is scintillating, and using the built-in launch control allows the car to reach 0-60mph in a mere 4.3 seconds. However, it’s only at high speeds that the powerplant hits its stride and really comes alive – and that is hardly ideal in the UK.

Crucially, the same can be said of the handling. At the test track, the BMW’s high-speed grip and ability on the limit with the traction control turned off are deeply impressive. However, at lower speeds on the road the BMW feels less responsive, and the variable-assistance steering is light.

Although its technical abilities and performance can’t be faulted, the M6 simply isn’t particularly rewarding or engaging to drive under normal conditions. This is exacerbated by the seven-speed semi-auto SMG gearbox, which has a jerky shift action that is uncomfortable for passengers and frustrating for the driver. So, considering its hefty price, does the BMW have a broad enough spread of abilities to win this test?

Price: £84,340Chart position: 4WHY: The M6 has distinctive looks and great dynamics, but is that enough to compensate for its two-door layout?