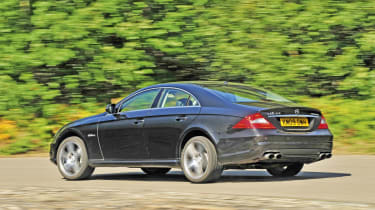 For performance car enthusiasts, AMG is part of the holy trinity.

The Mercedes tuning arm ranks alongside BMW’s M division and the Audi RS stable as home to some of the most potent cars around. The CLS is the oldest model here, though – can it keep up with its rivals?

At first glance, it does more than that, because the striking saloon sets the visual pace, thanks to a swooping roofline and purposeful stance. And with an AMG bodykit, larger wheels and extra badging on the front wings, the flagship model is the pick of our line-up when it comes to kerb appeal.

Unfortunately, its dated underpinnings are harder to hide when you climb inside. In common with the Porsche, its central console runs the length of the cabin, so the CLS is strictly a four-seater, but the rest of the interior is beginning to feel its age.

There’s ample room with a full complement of adults on board, but the Mercedes is cosier than the Panamera and its design is uninspiring. Despite its AMG-branded door sills, seats and steering wheel, the walnut trim gives the interior an old-fashioned feel. And the large analogue clock in the instrument cluster is at odds with the car’s high-performance intent.

There are no doubts about the potential of the normally aspirated 6.2-litre V8, which erupts into life with a throaty rumble. And while the M6 and RS6 both sound their best at full chat, the CLS 63 produces a muted rumble that puts a smile on your face even at low speeds. Unlike the twin-clutch Porsche and automated manual BMW, the Mercedes has a seven-speed automatic gearbox. It’s great around town, where its smooth shifts, and the engine’s 630Nm of torque combine to great effect.

Up the pace, and the CLS begins to creak – both literally and metaphorically. Over rough surfaces you can sense the body flexing, and its adjustable air-suspension thumps into potholes, which sends shocks through the cabin – even in its softest setting. The CLS also struggles to put all of its power to the road. With the stability control disengaged for our performance testing, it was all too easy to provoke tyre-smoking wheelspins, and a delicate approach is required to move away cleanly. Once up and running, the Merc’s NASCAR-style soundtrack is accompanied by thunderous acceleration, and the CLS sprinted from 0-60mph in five seconds.

Straight-line grunt is only half the story, though, and the softer Mercedes is no match for its rivals on twisty roads, where its body roll and vague steering call for a more measured approach. Its brakes were also the worst of our quartet. That’s a shame, as in Sport setting, the AMG’s auto gearbox does a fine job of anticipating downchanges and responds crisply to tugs on the steering wheel-mounted shift paddles.

The characterful Mercedes is an incredibly likeable performance saloon, though, and its mix of charismatic engine, sharp looks and a great soundtrack are almost worth the £74,555 price tag alone.