The styling will split opinion, but new star delivers a great drive. 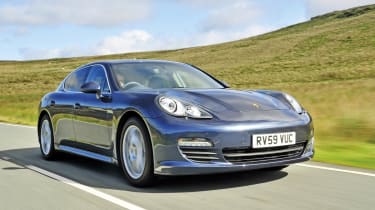 When building its first ever saloon, Porsche faced a tough choice. Should the Panamera have the instantly recognisable ‘family look’ inspired by its evergreen 911 sports car, or should it adopt a completely clean-sheet approach, as it did with the 928 coupé of the late Seventies?

Given the huge success of Porsche’s current line-up, it’s no surprise that bosses decided the Panamera should use the firm’s tried and tested design language. However, creating a car of this size to such rigid style parameters isn’t an easy task, and the debate about the bold appearance will probably keep fans of the marque arguing for years – particularly regarding the bulbous rear end.

Nevertheless, there’s no denying the Panamera has real road presence, thanks to its huge dimensions, which make it the longest and widest car here. If the exterior has you scratching your head, then the inside will leave you speechless. The cabin is superb.

A simple but beautifully designed dash features the classic Porsche four-pod instrument layout, with a useful duplicate colour sat-nav map option in the right-hand dial. The high-mounted central tunnel has buttons on both sides of the gear selector, and the overall effect is that all the controls are wrapped around you. The driving position is perfect, too – there’s an excellent range of wheel and seat movement. And with an identical seating height to a 911, the Panamera feels every inch a Porsche from the moment you sit in it.

Crucially, that unmistakable character can be felt on the move, too. The precision of the Panamera’s steering, combined with a positive turn-in, gives it an agility that nearly makes you forget its imposing size. In S trim, the rear-wheel-drive chassis has a delicacy that is missing from some rivals in this test, while traction, body control and grip are all deeply impressive. Porsche’s Active Suspension Management is standard, too, and this electronic damper control system delivers a ride that strikes a great balance between tautness and comfort.

In fact, only low-speed bumps and potholes send shocks into the cabin, making city centre trips a slightly jarring experience. At all other times, however, the Porsche feels very composed. Extensive use of lightweight materials helps the suspension by keeping the car’s kerbweight low – the Panamera tips the scales at 1,770kg, a healthy 255kg less than the Audi.

The twin-clutch PDK gearbox made its debut in the 911, but it’s well suited to the Panamera. In Normal mode, it delivers smooth, early upshifts to keep revs low. At 30mph, it selects sixth gear and cruises at 1,000rpm, which, combined with a stop-start system, helps economy when driving in town.

Switch to Sport mode, and it uses more revs and holds gears for longer, while the manual setting allows you to fully exploit the engine. The steering wheel-mounted controllers are still counter-intuitive – you push the buttons to change up, pull to change down – but the £2,289 PDK really fits the Panamera’s character, and is perfectly matched to the 4.8-litre V8.

With 395bhp and 500Nm of torque, the normally aspirated engine is the least potent in this group, but that doesn’t stop it from impressing. Power delivery is smooth, and the throttle response delicate – although with Porsche’s VarioCam technology, it revs very quickly and comes alive towards the red line. And thanks to the car’s light weight, performance is excellent – only the M6 can rival it for in-gear response.

It appears that Porsche has achieved the impossible, by blending traditional luxury car strengths of refinement, space and imposing looks with the firm’s own qualities of dynamic excellence and technical strength.

As ever, for those with deep pockets, there’s an enormous range of options to choose from. But even in its most basic form, the Panamera is a superb all-rounder that sets a high benchmark for its rivals here.

Price: £72,266Chart position: 1WHY: At last! Porsche has finally offered customers a sporty four-seater. Has it been worth the wait?