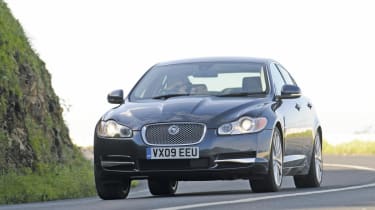 We're huge fans of the Jaguar XF. It was our Car of the Year in 2008, and we enjoyed a lengthy stint in the old 2.7-litre diesel on our long-term fleet. But the car tested here promises to be even better. The new diesel S has a larger 3.0-litre engine, tuned to produce 271bhp – 29bhp up on its rival.

Despite the new engine, there’s little to separate this XF from the one we ran for six months. And the only thing to distinguish it from the entry-level 3.0-litre oil-burner is the subtle S badge on the bootlid. Not that the saloon needed any changes – it was and still is the most attractive car in its class.

The Jaguar used to lead the way inside, too, but not any more. After driving the 5-Series, you can’t fail to appreciate its more substantial feel and higher-quality materials.

The XF is still able to grab your attention with its pulsing red starter button, rotary gear selector and leather dashboard – which is much more appealing than the soft-touch plastic of the BMW. They provide the kind of theatre that’s missing from the 5-Series, although the German car has the more premium feel overall.

The Jaguar is very generously equipped, though. Even in entry-level Luxury trim you get touchscreen sat-nav, Bluetooth connectivity and a folding rear bench all as standard.

The XF is longer than the 5 but has a shorter wheelbase, and that means passengers in the back have less space than in the BMW. It’s not cramped; it’s just there is clearly more legroom in the 5-Series. You also get less luggage room, as the Jaguar’s 500-litre boot is beaten by its rival’s 520 litres.

However, if you need more space, you have to pay an extra £340 for folding rear seats in the BMW; they’re standard on the Jag. If the 5-Series leads the way inside, the XF promises to even up the scores under the bonnet. Its 3.0-litre V6 delivers 271bhp and 600Nm of torque. These impressive figures should leave its less powerful rival trailing, but that’s not the case.

Despite the Jag’s advantage on paper, the BMW is faster from a standstill, thanks to its superior traction and smooth-shifting eight-speed gearbox. The latter enables lower intermediate ratios, without sacrificing cruising refinement at higher speeds. The BMW’s 105kg lighter kerbweight and more linear power delivery also helped give it the edge in our in-gear tests.

In entry-level Luxury trim, you get 19-inch alloys on the Jaguar, but our test car was wearing optional 20-inch rims – the same size fitted to higher-spec models. While the XF looks far better on the larger wheels, you pay the price on the road because it doesn’t absorb bumps as effectively as the BMW, especially at low speeds.

The big cat also has to play second fiddle as a sports saloon. Yes, it is engaging to drive and its more powerful engine has more low-down punch than the old 2.7-litre powerplant, but the Jag’s front tyres don’t generate as much grip as the BMW’s, while there’s more body roll in corners and dive under braking. As a result, is doesn’t feel as tightly controlled or agile.

The light steering – a familiar XF weakspot – is also less communicative, although its six-speed gearbox is very smooth in normal driving. The speed of changes is increased when you select the Dynamic mode, and steering wheel-mounted shift paddles come as standard.

If the BMW leads the way dynamically, you might expect the Jaguar to fight back in other areas, but the XF can’t match the low emissions or fuel economy of its rival. On the plus side, Jaguar’s excellent dealer network is one of the best. For company buyers it is the more expensive choice, though – despite an almost identical list price to the BMW.

WHY: The Diesel S is more powerful than any XF oil-burner we’ve tested before.