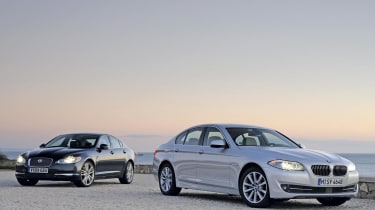 Is the Jaguar XF’s reign at the top of the executive class about to be ended? The British saloon was our Car of the Year in 2008, and has already seen off the latest Mercedes E-Class – but now it faces its stiffest challenge yet.

The new BMW 5-Series hits showrooms next month, and its aim will be to put the German firm back in its familiar spot, at the top of the executive car pecking order. With a new look and a host of electronic gadgetry, you wouldn’t bet against it. The brand’s EfficientDynamics hardware also ensures low fuel consumption, but the Jaguar will be no walkover.

Up against the BMW 530d here is the firm’s flagship diesel. We’ve never tested the 3.0 S before, so can the most punchy oil-burner in the line-up defend the big cat’s crown?

Look at the numbers and the more powerful XF should have an advantage. But the 5-Series has a trick up its sleeve, because its automatic gearbox features two more ratios than the Jaguar…

That’s right, BMW has fitted the eight-speed transmission from the bigger 7-Series to its new executive contender! Incredibly, it provides even lower emissions than the standard six-speed manual.

Will this help to propel the BMW to victory? Nothing short of brilliance will be required to beat our current favourite...

Margins of victory in this class are usually incredibly tight, but the 5-Series surprised us with its strong showing here. In the end, it ran out a comfortable winner – which is all the more impressive given its rival’s position as our reigning champion.

The new BMW achieves the incredible feat of providing the kind of driving enjoyment, agility and grip you expect from a 3-Series, with the comfort and refinement of the company’s luxurious 7-Series. Admittedly, our car had the clever Adaptive Drive set-up and it costs slightly more than the Jaguar, but on this evidence the 5 is the best car in this sector – and worth its small price premium.

For its part, the XF is still a class act, and it now comes with an engine to match its looks. It’s still the most elegant executive car choice, but it’s no longer the best...

Ranking 1st - BMW 530d SE The 530d is an incredibly talented and desirable machine. It doesn’t break new ground, but it’s all the car most people will ever need. We are looking forward to testing the imminent entry-level 520d, which at £28,165 is more affordable, too.

2nd - Jag XF 3.0D S Luxury Make no mistake, the XF remains a truly brilliant executive car – it has just come up against a younger and more talented rival. The extra punch of the flagship diesel provides impressive pace, but the BMW is a more complete package.