Fantastic on the road – but is the low-key styling just too safe? 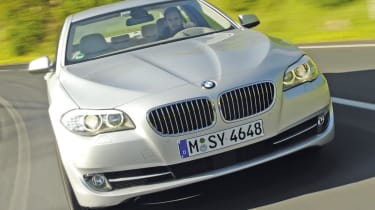 Losing out on top spot in the executive sector must have hurt BMW. When the Jaguar XF arrived in 2008, the 5-Series had been a regular group test winner, so the all-new model has one objective – to topple the big cat and re-establish itself as the number one.

Take a look at the German saloon, though, and you’ll be surprised by its low-key styling. With its new executive saloon, the firm seems to have followed the ‘Russian doll’ approach, as it resembles a large 3-Series or small 7-Series, depending on your point of view.

At first glance it lacks the style of the Jag, but spend more time with the BMW, and you start to appreciate its clean profile, smooth surfaces and neat details. It won’t inspire the ‘must-have’ reaction of the XF, but the 5-Series is a smart piece of design that will neither offend existing owners nor frighten newcomers. And anyone familiar with the cabin of a current BMW will be instantly at home inside.

The quality of the materials and solidity of its construction are impressive, while the degree of safety kit and technology is amazing. And while the XF wins points for detailing and design, the BMW scores on execution and simplicity. Finding fault with the interior requires nit-picking, but the buttons for the optional head-up display and lane departure warning system are hidden by the steering wheel, and you can only use the slot designed to hold the keyfob if you open the lidded storage cubby on the centre console.

It ruins the clean lines of the cabin, so you’re better off leaving the keyless device in your pocket instead.

The driving position is perfect, with a huge range of reach adjustment available on the steering column. The rim of the wheel is thinner than before, making it more pleasing to hold. Rear passengers get a better deal, too, as the 530d has noticeably more legroom than its rival.

One thing these cars have in common is their engine size. Both feature 3.0-litre diesels, and the BMW’s impressive straight-six is quieter at idle than its rival, but has to take second place for power. With 242bhp and 540Nm of torque, the Jaguar has more on-paper punch, delivering 271bhp and 600Nm respectively.

In reality, the gap between the two cars is minimal. The combination of the 5-Series’ greater traction off the line and its smooth-shifting eight-speed automatic gave it the edge in the sprint from 0-60mph and all our in-gear tests.

The Jaguar used to set the dynamic benchmark in this class, but thanks to its mixture of finesse and refinement, the BMW raises the bar. Not only does it handle with the poise and balance we’ve come to expect from the firm, but it also provides superior comfort and refinement. On twisty roads, its front tyres generate huge amounts of grip, and if you get caught out by a tightening bend, or surprised by an unexpected bump, it maintains its composure with superb body control. Then, when you hit the motorway, the supple suspension provides the kind of soothing ride comfort the Jaguar can’t match.

With the promise of strong residuals and the firm’s great-value servicing packages, the BMW should be as good to own as it is to drive. So while it doesn’t revolutionise the executive class, the latest 5 makes a big step forward.

WHY: With a heritage of executive excellence, the 5-Series has big shoes to fill. Does it fit the bill?