Sensational looks and impeccable luxury are guaranteed – but what is top Brit like to drive? 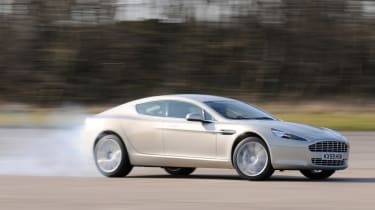 THERE has been an amazing sense of anticipation surrounding the Rapide. Its exquisite design stops onlookers in their tracks, but does it live up to its looks?

The family resemblance between the newcomer and other Aston Martin models is uncanny. From dead ahead or directly behind, it’s easy to mistake the Rapide for a DB9 or Vantage. Only in profile does the car give the game away, as the slender proportions and five-metre-plus body set it apart from just about anything else on the road.

In direct contrast to its rival here, the Aston is a styling masterpiece with just the right amount of glitz provided by its flush-fitting headlamps and intricate alloy wheels. The so-called ‘swan wing’ doors aren’t only for show, either. They open upwards and outwards at 12 degrees, which means they’re unlikely to come into contact with pavements when you park against the kerb – a vital consideration in such a low-slung and expensive model.

Each door is held open by a gas strut, and when you lower yourself inside, the front cabin is as snug and sporty as any of the firm’s two-seater machines. Top-quality wood, leather and alloy finishes give the interior a high-class, tailored feel. Neat touches include the distinctive instruments (which look great at night), a pair of classy magnesium gearshift paddles fixed to the steering column and a new electronic parking brake in place of the firm’s traditional fly-off handbrake.The really big news is at the back, though, where an extra pair of doors are neatly integrated with the car’s sleek profile. These swing back to reveal a compact opening.

There’s an art to getting in, and you have to carefully thread your feet through the narrow gap between the front and rear seats. But once seated inside, there’s a surprising amount of space. The Rapide doesn’t match the vast Panamera cabin for rear comfort, and you perch on the Aston’s individual seats rather than sit in them.

Yet even tall adults will be able to cover decent distances in the back without too much complaint. Only the lack of under-thigh support really lets things down, while there isn’t as much space in which to spread out as in the Porsche, meaning passengers can feel a little hemmed in. Even so, you get the same material quality as is afforded to people travelling in the front, while the huge centre console, which runs the length of the cabin, houses the controls for the rear ventilation system.

Boot space is another area where the Rapide sets new standards for the British manufacturer. The 317-litre load area is beautifully trimmed and features a folding bulkhead to boost practicality. Flop this down and the Aston becomes a conventional five-door hatchback – and if you fold the rear seatbacks there’s a useful 886 litres of space.

If the extra practicality provided by the Rapide will seem alien to existing owners, the driving experience is pure Aston. The car shares its V12 with the DB9, so the 470bhp four-seater has the same intoxicating soundtrack as its two-door cousin. The bassy idle gives way to a howl as the revs rise and the scenery blurs.

Against the clock on our test track, the Rapide couldn’t match the astonishing performance of its German competitor. While the Aston took 5.2 seconds to sprint from 0-60mph, the Porsche needed only 3.6 seconds – but the Brit delivers more drama and sensory stimulation at 30mph than the Panamera does when travelling three times as fast.

The Rapide features a six-speed automatic gearbox, and this isn’t as smooth or quick-shifting as the seven-ratio dual-clutch manual transmission fitted to its clever counterpart. However, only the slow shift between first and second gears really detracts from the driving experience. Also, the alloy paddles that provide manual control are much more natural to operate and tactile to touch than the sliding plastic controls favoured by Porsche for its PDK.

There’s a separate Sport setting on the Rapide’s self-shifter. This gives a more aggressive profile, with sharper responses and a willingness to hold on to gears for longer in auto mode. Pure pace is only half of the supercar story, though, and from behind the wheel the Aston is simply sensational. Thanks to weighty steering and a set of powerful and progressive brakes, it is enjoyable and surprisingly easy to drive fast. The seating position is excellent and the ride comfort provided by the adaptive dampers is firm without being tiresome. A separate button allows the driver to put them in their sportiest setting.

While the Porsche strikes a better balance between handling and comfort, and generates more grip as well, the Aston’s rear- wheel-drive chassis has a trick or two up its sleeve. With 600Nm of torque channelled through only two rear tyres, lurid tailslides are just a flex of the right foot away when the stability control systems are disengaged. This kind of adjustability and exuberance simply isn’t available from the Panamera. So, while you’ll be able to drive faster and in more comfort in the Porsche, you’ll have more fun in the Aston Martin – but is that enough to justify the extra outlay?

Chart position: 1WHY: All-new Aston mixes sharp styling with four-door practicality, 12 cylinders and 470bhp. But does it live up to the promise of its looks?