Which has the best interior?

A special car needs a special cabin. So which fits the bill here? 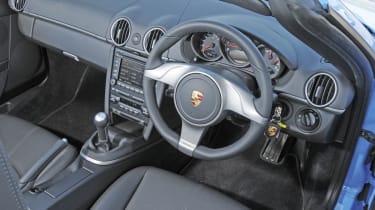 With the hood safely stowed, the world and his wife can admire your roadster’s interior, so it needs to look good. And as you’ll be the one spending time in it, a car’s ability to make each journey feel special is a priceless asset. Good ergonomics and plenty of kit also add to the enjoyment. But which of our drop-tops boasts the best cabin?

The 370Z has a wealth of retro touches inspired by the original Z-cars, including a trio of racy circular auxiliary dials above the centre console. But while their red-on-black typeface recalls the firm’s early sports cars, it’s at odds with the white-on-black of the main instruments.

One thing you can’t fault the Nissan for, though, is the amount of standard kit inside. The GT pack includes heated and cooled leather seats, a CD changer, cruise control and xenon headlights. And Connect Premium (£1,550) adds sat-nav plus a 9.3GB hard drive.

If only the company had spent as much money on the ergonomics.

The steering wheel adjusts for rake only, while the seatbase feels too short and lacks under-thigh support. They’re electrically adjusted, but the controls are oddly located next to the wide transmission tunnel, and feel cheap. In this company, however, much of the Nissan’s cabin is below par – most notably the switchgear, elements of which are derived from other less exotic models in the firm’s range. A smattering of leather and suede help to lift the ambience a little, but poor plastics on some surfaces lower the tone.

In contrast to the dark finish in the 370Z, our BMW’s light- coloured interior is a revelation. And even with the roof in place, the Z4’s extra side windows make the cabin feel bright and airy compared to its fabric-roofed rivals. Finding the correct driving position is also easy, thanks to a fully adjustable steering wheel and excellent seats.

On the whole, the interior is well built and robust, and while some of the switchgear is shared with other BMW models, it’s of such high quality that it simply doesn’t matter. It’s also the only model on test to feature an electronic parking brake, which saves space on the centre console. One area where the Z4 can’t beat the 370Z is on standard spec. While the £33,830 price brings xenon headlights, leather trim, climate control and MP3 inputs, the car trails on toys.

Standard equipment is not the Porsche’s forte – much of the kit found on its rivals is relegated to the Boxster options list, including xenon lights and climate control. As an example, our test car had more than £11,000 worth of extras fitted, including nearly £4,500 on its lurid Exclusive paint finish and black Boxster S alloy wheels.

From behind the wheel, this seems less important, and the low-slung driving position and perfectly placed pedals provide a masterclass for interior designers. The dark leather upholstery and rooflining made our model feel a little claustrophobic, and the traditional Porsche approach is sober for such a fun car. There’s no faulting the build quality, though, as the Boxster feels the most solidly assembled vehicle on test, with superb plastics and material quality.

The Porsche’s layout is by far the sportiest of our test trio, too. Its centrally mounted rev counter and easy to read black-on-white instruments successfully blend clarity with real racing intent.

Advertisement
Go Back toWhich is the most user friendly?
Continue ReadingWhich is the best to drive?