Which is the best to drive?

Sharp looks are all well and good – but the best roadsters must deliver behind the wheel thrills, too 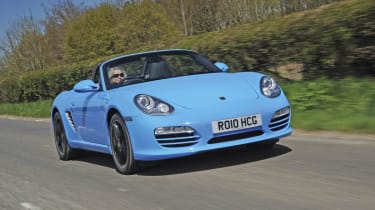 Cruising along in the blazing sunshine with the top down is critical to the appeal of these models, but the roadsters in this test are built as much for driving pleasure as they are for posing appeal.

The Boxster is the most focused car in our test. Its flat-six engine is muted on start-up, although there’s a pleasing rasp when you blip the throttle – especially with the optional sports exhaust system fitted to our example.

All of the controls are perfectly weighted and well judged, while the stubby gearlever is accurate. There’s plenty of feel from the steering, and its mid-engined layout provides a neutral balance to the chassis that the other cars simply cannot match.

Body roll is negligible, but the suspension is still comfortable on long motorway drives. And while the engine can’t rival the torque outputs of its opponents, the lower kerbweight means the car never feels slower from behind the wheel. In fact, the Boxster beat the BMW from 0-60mph by one-tenth – with a time of six seconds exactly – and its in-gear performance was impressive.

Explore the rev range further, and the acceleration gets harder and faster. But even at lower speeds, the Porsche provides an enjoyable experience. Precise and well weighted controls combine with the tractable engine to make it easy to drive.

The BMW is also in its element at low speeds, thanks to soft and supple suspension. Its run-flat tyres can still drop heavily into ruts, and the steering could do with more weight, but overall, it is relaxing to drive.

Turn things up a notch, though, and the Z4 begins to struggle. Body control deteriorates across undulating tarmac, while hard acceleration or deceleration sees the nose pitch up or downwards dramatically, which is disconcerting in such a high-performance machine.

The engine feels the least responsive, too – this became clear at the test track, although there’s not much between any of our cars. The design of the BMW positions the driver slightly ahead of the rear axle, which provides near-perfect weight distribution. This balance is evident in corners, where the Z4 grips impressively.

Push too hard into a corner in the 370Z, and the front tyres will wash wide of the desired line. What’s more, the rear wheels break traction, thanks to the car’s incredibly stiff suspension set-up.

At higher speeds on bumpy roads, the 370Z darts around nervously and the fidgety ride quickly becomes tiring. In fact, the suspension is so stiff, we experienced a severe vibration through the bodyshell during our brake tests, although this didn’t affect its performance.

At least the engine provides the kind of strong acceleration we’ve come to expect from a Z-car. The Nissan was fastest from 0-60mph, in 5.9 seconds, and was only beaten for pace in our sixth gear 50-70mph run.

Yet the Japanese car’s 3.7-litre engine doesn’t sound nearly as sweet as its rivals’. Its exhaust takes on a harsh note in the mid range that sees a strange vibration make its way through the wheel, pedals and gearlever – a major drawback in an open-top model.

Advertisement
Go Back toWhich has the best interior?
Continue ReadingWhich is the most stylish?