Which is the most user friendly? 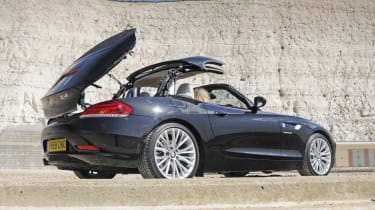 You don’t buy a roadster because it’s practical and easy to get on with. But the more user-friendly a car is, the happier an owner is likely to be – and the more fun it will be to run.

You could be forgiven for assuming the mid-engined Boxster is the least sensible choice, but you’d be wrong. Yes, you have to release a manual locking lever before deploying the powered hood, but once you’ve done this, it folds around 10 seconds faster than its rivals. And it also operates on the move – something that isn’t possible in the Nissan or BMW.

Living in the UK, chances are your car will spend more time with its hood up than down, so being able to open and close it on the move is a big plus. It means you can take advantage of every shaft of sunlight or avoid being caught out by a shower.

The secret to the Boxster’s success is the fact it doesn’t feature a tonneau cover. This does leave the canvas hood on show when stowed, but it still integrates neatly with the surrounding bodywork. And it doesn’t eat into boot space. The Porsche has another trick up its sleeve – it offers two load areas. Together they provide a maximum capacity of 280 litres.

Another surprise is the Boxster’s 64-litre fuel tank. With economy on our test of 26.1mpg, it gives the Porsche a healthy range of around 370 miles between fills. CO2 emissions of 221g/km rank it close behind the BMW and comfortably ahead of the Nissan. Annual road tax will set you back £245.

Thanks to its folding hard-top, the BMW is arguably the most practical car for UK weather. The extra protection provided by the tin-top design is especially handy during colder months, and the mechanism feels beautifully engineered. Unlike the Porsche, it can be operated only while the car is stationary, meaning it’s easy to get caught in a downpour.

And with the hood stowed, the BMW struggles, as the already modest load space is cramped for anything more than a couple of soft bags. It can also be difficult to retrieve items through its narrow opening. The BMW has the most refined cabin with the roof down, and its extra pair of side windows help to minimise buffeting.

Economy of 27.8mpg was the best in test, and with CO2 emissions of only 199g/km, the Z4 is the least polluting choice, meaning buyers will have to fork out £235 for a year’s road tax.

Nissan owners should get used to the sight of fuel pumps, because the 370Z achieved only 20.1mpg in its time with us. And even though it has an enormous 72-litre tank, the Roadster won’t manage to cover much more than 300 miles between fills. High emissions of 262g/km result in annual road tax of £435.

Although it can’t match the boot space on offer in the Porsche, the Nissan’s hood doesn’t encroach when folded, and the company proudly claims that you can fit a set of golf clubs inside.

Folding the canvas top requires nothing more than the flick of a switch, but the mechanism retracts noisily and its vibrations rock the car as it settles into place. You also have to raise the side windows yourself when the hood is fully deployed. And with the roof up, the shallow rear screen makes reversing a tricky task.

Advertisement
Go Back toIntroduction
Continue ReadingWhich has the best interior?