Which is the most stylish? 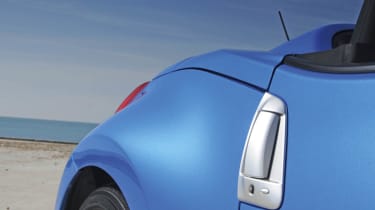 Creating a sporty roadster sounds like a car designer’s dream job, but it’s a double-edged sword. The complexities of ensuring a convertible looks as good with the roof up as it does down can make this a formidable task.

It’s a trap the team behind the BMW undoubtedly fell into. The Z4’s folding metal roof is a great piece of engineering but, stylistically, it’s the car’s Achilles’ heel. When in place, the hood’s bulky mechanism stunts the roadster’s smooth flowing lines. The sharp angle of the rear window, flat rear deck and deep rear wing only serve to make the rump appear oversized. And the wheels look lost in their arches. Fold the hood down, though, and the BMW is transformed – its long-nosed proportions are reminiscent of the traditional British roadster, with a flowing bonnet, stubby rear and a low windscreen.

It’s full of muscular, cartoon-like curves – if you asked a child to draw a sports car, the Z4 shape is probably what you’d end up with. The slanted shark nose, wide kidney grille and distinctive headlamps give it an imposing and unmistakable face.

Specification and colour choice are critical, though, and while the optional 18-inch alloy wheels and black paint of our model look classy, it’s rather conservative compared to its rivals here. In contrast, the Nissan is no shrinking violet, thanks largely to our GT-spec test car’s bright Le Mans Blue paint and optional 19-inch alloys. The latter add real presence and fill the arches perfectly.

Other elements are more subtle, but no less pleasing.

For example, the integrated indicators in the Z badges on the front wing are a neat touch. However, the 370Z is the only car to have a visible aerial, and the prong on the rear deck gives it the look of an oversized radio-control toy. As with the BMW, the Nissan looks best when its roof is folded, where the speedster-style rear clamshell and muscular haunches lend it an air of real purpose.

With the roof in place, the size of the rear is accentuated, and the fabric top looks as though it is an afterthought. This is a pity given how often it will be erected.

The best balance between summer and winter style is arguably provided by the Boxster. The firm’s evolutionary approach means the latest car is a familiar shape. Ignore the vivid blue paint on our model – it’s an ill-advised £2,774 option – and it looks great, whether the roof is up or down.

A mid-engined layout gives the Porsche a squat shape, making it appear more purposeful and focused than the BMW and Nissan. Side-mounted engine intakes and a central exhaust add to the sporty lines.

And while critics will say the Boxster’s styling is too similar to its Cayman and 911 stablemates, we think this is a strength, rather than a weakness.

When the roof is stowed, you’ll notice there are no fancy tonneau covers to hide the fabric hood. It’s not exactly messy, but doesn’t provide the same slick profile of its roadster rivals in this test, either.

Advertisement
Go Back toWhich is the best to drive?
Continue ReadingFacts and figures