MINI Countryman vs Audi A3

The Countryman loses out to the Yeti, but how will it compare to a more conventional premium rival? 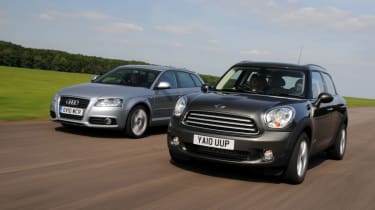 The new Countryman isn’t good enough to topple the best crossover model around – but how does it rate against a hatchback with proven prestige credentials? The great thing about crossover models is that they can multi-task, so versatility should count in the MINI’s favour against the Audi A3, even in practical five-door Sportback trim.

There’s no disputing the A3’s premium status but, for all the appeal of its badge, it’s a conservative choice. In comparison, the MINI could hardly be more daring. Whatever you think of the quirky looks, the British brand is clearly banking on the car’s fun image and incredible scope for personalisation to gain an advantage. And on these grounds alone, it’s easy to see the Countryman’s appeal.

But when you climb aboard, the Sportback counters with more space and a higher-quality finish. Its interior is free from gimmicks like the MINI’s space-saving handbrake and central speedo, so the chalk-and-cheese comparison continues inside. If you want a fun and exciting option, the Audi won’t be the model for you – but if you prefer your driving environment to be clear and simple, it’s an obvious choice.

Neither car seizes the initiative when it comes to kit. The MINI matches the Audi and adds reverse parking sensors, but there’s little else between them. The size of the options list does set them apart, though. Audi is well versed in the art of selling add-ons, but MINI is in another league.

Buyers can choose from a huge variety of interior colour schemes, as well as exterior accessories – including bonnet stripes and decals. Our test car featured more than £6,000 worth of extra kit, making it more costly than the Audi – even though the A3 was fitted with the firm’s S tronic gearbox (£1,450).

Turn your attention to practicality and the MINI also stumbles. Despite being the most practical model in the line-up, it has a smaller boot than the A3. What you do get is a higher vantage point, so visibility from behind the wheel is better and the cabin feels more airy – although this is partly down to our test car’s light interior.

So far then, our protagonists have been either closely matched or worlds apart – but how they perform on the road will go a long way to determining the winner of this test. Does the MINI’s quirky appearance and fashionable status transfer to the driving experience?

The answer isn’t exactly straightforward. For a start, the Audi feels much more potent. It has 28bhp more power, at 138bhp, so this came as no surprise – but the margin of its superiority did. Aided by our test car’s optional dual-clutch transmission, the A3 covered 0-60mph in 9.2 seconds – more than one second quicker than the Countryman could manage. And even without its clever gearbox, the Audi would leave the MINI trailing.

The British newcomer needs to be worked hard and its diesel engine is neither as refined nor as punchy as the A3’s unit. The MINI does have alert steering responses, but the Audi’s more consistent set-up is in keeping with its grown-up image, and it’s a much more comfortable long-distance companion.

While the Countryman’s firm suspension provides agile handling, the trade-off comes in terms of ride comfort. The car thumps over big bumps. The Audi isn’t as much fun, but it’s capable and satisfying to drive quickly as a result. You can cover ground smoothly and efficiently in the A3 in a way that isn’t possible in the taller-riding and noisier MINI.

The Countryman does have a trick up its sleeve in the shape of its All4 transmission. No one is going to buy the MINI as an out-and-out off-roader, but its all-wheel-drive ability will be reassuring in icy winter conditions and handy on muddy grass.

Audi has established a reputation for its all-wheel-drive quattro models, but the only diesel Sportback available with the confidence-boosting set-up is the flagship 168bhp model – and prices for that combination start at a hefty £23,275 in SE guise.

In 138bhp front-wheel-drive S tronic trim, the A3 is an exact match for the MINI on economy and emissions. For that, Audi can thank its smooth operating stop/start system and a similar range of eco-boosting features to the Countryman.

Opt for a manual variant, though, and the Audi drops to within £1,000 of the MINI’s list price, while CO2 emissions of 115g/km ensure an even lower tax burden for company users (undercutting the 129g/km Countryman).

Choosing a winner here is a much tougher proposition than in our first pairing. The MINI Countryman emerges as a very different proposition. But is it a better one?

WHY: The A3 is no spring chicken in the prestige hatchback market – but five-door Sportback is good to drive, handsome and practical.