All-new countryman aims to add chunky SUV appeal to mini’s successful hatch package. We test it against A top crossover and prestige five-door 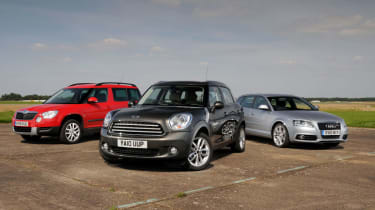 THE MINI range just keeps on growing. And the latest model to join the fray is the new Countryman. The tall-riding five-door is part family hatchback and part crossover – but does that formula make it a road test winner?

To find out, we’ve lined up a pair of very different rivals. First, the MINI will face our reigning Car of the Year in the distinctive shape of the Skoda Yeti. Our favourite crossover model, it’s great to drive, handsome and practical – and it comes in two and four-wheel-drive forms.

The British brand offered only all-wheel-drive versions of the Countryman at the launch, so we grabbed the keys to the Cooper D All4 to test against a Yeti 2.0-litre TDI 4x4.

The Czech model has power on its side, but misses out on the clever stop/start technology of its all-new rival. That’s not the case with the other car lining up to take a shot at the MINI. Buyers on the lookout for a premium-badged family model will have an Audi A3 on their shopping list.

And the 2.0-litre TDI Sportback facing the newcomer in our second head-to-head gets fuel-saving technology as standard. So read our twin tests to see whether the Countryman is a jack of all trades or a master of none.

What do we make of the new Countryman? Well, it’s a logical extension of the MINI range. Existing owners will now have somewhere to go when they’ve outgrown their hatchback and Clubman models... the question is, should they take the plunge?

The answer depends on what you want and need from your car. As a crossover model, the newcomer is flawed, with its limited cabin and load space compromising practicality. The Yeti is every bit as good to drive and comes better equipped – so the MINI’s biggest selling points are its dubious looks, image and extensive array of optional extras.

As a premium hatch, it also falls short, offering neither the comfort nor refinement to really cut it. But while it loses in both tests here, MINI is sure to find plenty of homes for its new car. A legion of fans will relish the Countryman’s fashionable status, and it provides low emissions for a four-wheel-drive model. We’re certain it will be a sales hit, but the two-wheel-drive car promises to be the most appealing choice – and a potential rival to VW’s Golf.

1. Skoda Yeti TDI SE Our reigning Car of the Year has dispatched another rival. The only real chink in the Skoda’s armour is its relatively high emissions.

2. Mini Cooper D Countryman An interesting choice, but the Countryman suits brand fans who want a five-door MINI. There are more talented and practical buys.

1. Audi A3 SE Sportback It’s showing its age, but the A3 is still on its game. Spacious cabin, punchy pace and superior comfort and refinement give it the edge.

2. Mini Cooper D Countryman If you want the security of 4WD, the Countryman makes sense, but as a premium hatch it falls short – although it’s impressively efficient.

Continue ReadingMINI Countryman vs Audi A3