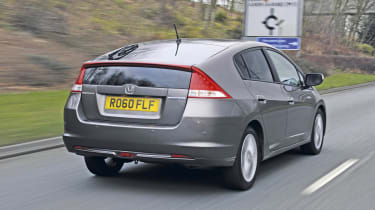 6
Japanese giant Honda has plenty of hybrid experience, and launched its first Insight model back in 1999. Now, just over a decade later, we have its best effort yet.
If you want to stand out, even among the eco crowd, the Insight is the car for you. The styling is distinctive and, unlike the Leon, it doesn’t try to hide its energy-efficient objectives. However, the beetle-like shape, with its high rear end and narrow stance, isn’t the last word in style. While it’s clearly aerodynamic, the result is anything but elegant.
Elongated side windows and a long wheelbase do little to help the proportions, yet neat details include blue headlamp surrounds and a split-level rear window. Go for ES spec and you get 16-inch alloy wheels, front foglights and privacy glass. These combine with our car’s metallic bronze paintwork to create an upmarket impression.
This more expensive air vanishes as soon as you climb aboard. We were critical of the previous Insight’s cabin, and while the plastics have been improved, they’re still not a patch on the Leon’s.
The new car retains the futuristic layout – and this will divide opinion as much as the exterior. Although the digital instruments are distinctive and clear, some drivers will find the speedometer is obscured by the rim of the steering wheel. What’s more, the seats don’t adjust low enough for tall owners, and they provide little in the way of side support.
As a family car, the Insight begins to struggle. The rear seats provide much less leg and headroom than the SEAT’s. Boot capacity figures suggest the Honda is more spacious, but the Japanese firm measures to the roofline rather than the parcel shelf, so its 408-litre volume is flattering. This is largely down to the location of the hybrid’s battery pack beneath the high floor.
Aside from cabin quality, our other major gripe about the previous Insight concerned the ride and handling. This has been improved in the revamp. The stiff springs remain – this is necessary because of the heavy battery pack slung out over the rear axle – but the ride has lost some of its harshness, making the car more comfortable than before. However, it can still get choppy over some surfaces.
The heavy batteries also come into play through bends, as there’s pronounced body roll. This makes it feel as though you’re travelling much faster than you really are in the Honda, and can translate into some unusual handling traits. Lift off the throttle mid bend, for example, and you can feel the weight in the rear of the car come into play as it tightensits line dramatically.
The hybrid drivetrain consists of a 1.3-litre petrol engine and a small electric motor, and it’s an intriguing proposition when lined up against the traditional diesel engine in the SEAT. On paper, the two cars are evenly matched, and at the track, the Honda managed to accelerate quicker than its rival. However, on the road, when combined with the seven-speed CVT box, it makes for frustrating progress. Accelerate hard and the revs rise sharply, but the Insight doesn’t feel particularly potent. It’s much noisier than its rival, too.
Even so, at a constant cruise, the Honda is relatively refined, as the engine settles down to 2,250rpm at 70mph. In fact, if you lay off the throttle a little when accelerating, and keep the revs at around 4,000rpm, it still accelerates quickly, but with much less drama.
Green credentials are the key to this test, and with a CO2 output of 105g/km, the Honda is competitive for the family car class. But it’s no match for its rival – the latest diesel technology gives the Leon a 6g/km advantage on emissions. This means it’s exempt from road tax and London’s Congestion Charge. Insight owners pay £20 a year for a tax disc, and those in the capital
also face the £10 daily levy.
There’s more bad news in the fuel economy stakes. An official 61.4mpg claim trails the Leon’s by 12.9mpg. In our hands, the gap wasn’t so big, but the Insight still lagged 7.6mpg behind, with a return of only 38.5mpg.
So while the Honda is much improved, it faces a challenge to tempt buyers from diesels.

Chart position: 2WHY: Revised Insight adds a better-quality interior and fresh styling, although its clever hybrid powertrain is left untouched. To maximise electric-only running, you need to use a light right foot.