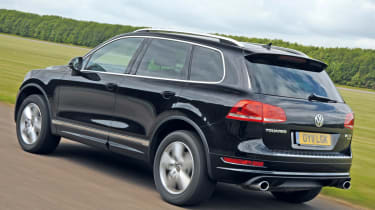 Any vehicle developed in association with sports car maker Porsche is sure to drive well. But does the VW Touareg do enough to compete in this very specialist sector of the market?

Unlike its Cayenne sister car, the Touareg looks understated. Compared to its boxy Land Rover and brash Jeep rivals, it’s the conservative choice for SUV buyers. It’s also smaller than its rivals, although LED daytime running lights and chrome detailing add a dash of style.

Technically, the Touareg is the least accomplished off-road, as it does without the sophisticated systems of the other cars. Still, it managed to follow in their wheel tracks on our off-road course. The difference is the way it feels from the driver’s seat, as it lacks the effortless ability of the Discovery 4 and the rugged charm of the Grand Cherokee.

Air-suspension cushions the occupants from bumps, and the ride height can be adjusted, while there’s an off-road mode and hill descent control for tougher routes. The latter was more than a match for the systems in its rivals, and the VW has a higher wading depth than the Jeep – although its approach and departure angles aren’t as impressive.

Any lack of mud-plugging ability is made up for on the road. The 3.0-litre diesel has the strongest performance, and the Touareg sprints from 0-60mph in 7.4 seconds. It’s by far the most refined, too: at times it’s easy to forget there’s a diesel engine under the bonnet. Performance is aided by an eight-speed DSG automatic gearbox, which is incredibly quick and smooth. As a result, the Touareg is the most car-like choice on the tarmac, gripping hard and containing body roll better than either rival. A lower kerbweight also means it can scrub off speed with much less drama.

As with the exterior, the cabin isn’t particularly dramatic, but there is plenty of kit in Altitude spec. It’s solid, too, and the level of fit and finish is excellent. While it’s not as opulent as the Land Rover or as well equipped as the Jeep, the driving position is great – it feels more like a large estate than an SUV.

The Touareg is the smallest model of our trio, but there’s plenty of space inside, and the boot can accommodate a generous 580 litres of luggage with the back seats in place. Its lower kerbweight combines with a stop-start system to give strong economy.

The VW is the most efficient car on paper, and so it proved in our test. A 24.1mpg return on our demanding route was some way short of the official combined figure of 39.2mpg, but it was better than the Land Rover. However, where the Discovery 4 emits CO2 at a rate of 244g/km, the Touareg is leagues ahead, with its 189g/km output.

Admittedly, the Land Rover will get a revised gearbox later this year, which should see that figure drop, but the VW is well ahead of the game here. Will that be enough for it to take victory?