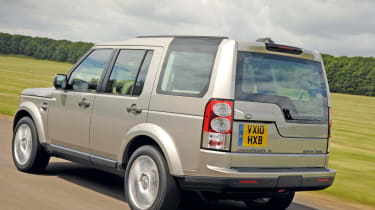 Even before its mid-life facelift in 2009, the Land Rover Discovery 4 was an Auto Express favourite. We’re big fans of its blend of luxury car desirability, seven-seat practicality and off-road ability.

It’s now better than ever, and even though the styling benefited from only a mild update, the car looks the most modern choice in this test. It’s a distinctive design and, as with the Jeep, has plenty of styling cues that hark back to the original model, which was launched back in 1989.

It’s certainly the toughest and most purposeful 4x4 in this test, with its Tonka toy proportions. But what really impresses is the way the SUV integrates this rugged appeal with classy Range Rover- style detailing. The cheese-grater grille, sculpted body and smart wheels ensure it has the most premium look in this line-up.

Inside, it’s a mix of chunky switchgear and classy materials. The result is a cabin that manages to successfully blend ruggedness and luxury into one. Being the longest car here, it’s no surprise the Land Rover is also the most spacious, and the extra pair of rear seats improve its practicality – even if they do eat into boot space when in use.

But the Discovery 4 hasn’t forgotten its roots, and you’re reminded of its capabilities as soon as you venture off the beaten track.

With a wading depth of up to 700mm, plus the largest approach and departure angles here, it certainly has the right credentials. These are backed up by its Terrain Response system and air-suspension. As with the Jeep, the ride height can be adjusted, and the Terrain Response system gives a choice of different modes to suit the surface. It optimises the car’s controls, differentials, suspension and transmission to boost traction.

On the road, the Land Rover is more refined than the Grand Cherokee, with a less intrusive engine note. Yet despite its huge 599Nm torque output, it never feels as quick as the performance figures suggest – taking on a much more leisurely approach.

The car’s height comes into play on the open road as well, as it exhibits considerable body roll long before it loses grip. You never truly forget you’re behind the wheel of a tall SUV. Plus, the Discovery 4’s extra weight rears its head under braking; it took 3.1 metres longer than the VW to stop from 70mph in our test, with a distance of 51.9 metres.

Once again, the Land Rover is let down by its inefficiency. It proved more economical than the Jeep, but the 244g/km CO2 output is by far the worst here, and means private owners pay £445 for a year’s road tax.

But while it’s not the most efficient choice, the Discovery 4 is the cheapest to buy, as well as the most spacious. And it mixes go-anywhere ability and luxurious charm. The question is whether all this is enough for it to retain its crown?

Chart position: 1WHY: Our favourite SUV provides more space and versatility than its rivals, as well as impressive handling ability on and off the road and a sumptuous interior.