New SUV is more stylish than before and greener too, yet remains unstoppable over rough terrain. 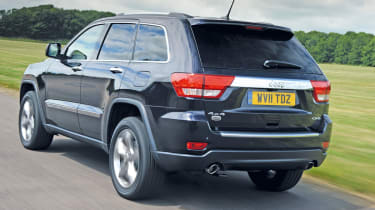 American giant Jeep has always played second fiddle in the British SUV market – but it’s easy to see why. With homegrown favourite Land Rover to contend with, even a brand-new Grand Cherokee has its work cut out to take top spot.

The brand has an even longer history than its counterpart, and its trademark seven-slot grille has survived the company’s 70 years in existence intact. It’s the defining feature at the front of the full-sized 4x4.

Squared-off wheelarches and lashings of chrome detailing give the newcomer a brash look, while short overhangs help to improve its approach and departure angles for off-road work. And if you’re planning some serious mud-plugging, the front spoiler can be removed entirely. Inside, the Jeep employs the same tactics as outside, with plenty of glitzy detailing and all-American charm. It’s stylishly laid out, and comes finished in the leather, wood and brushed metal you’d expect from an SUV costing £43,995.

Look carefully, though, and you’ll be disappointed – the plastics are too shiny and flimsy to the touch, while the leather dashboard and seats lack the high-quality feel of the hide in its rivals.

Settle behind the wheel, and the driving position is more car-like than in the Land Rover. But there’s nowhere to rest your left foot on long journeys, and the pedal-operated parking brake isn’t as convenient as the electronic systems found in the other cars here.

There’s also a powered tailgate, which opens sluggishly to reveal a 457-litre boot. This is a decent size in isolation, but it comes up short compared to the Land Rover and VW. Practicality takes a further knock because the load cover is positioned too low – with this in place, the luggage area is really shallow.

Still, a separate opening rear screen improves access to the boot in tight spaces. It’s off-road where the Jeep really shines, though. Overland models get the new Quadra Lift air-suspension as standard, and it allows the driver to adjust the ride height using controls on the console.

Raise it to its maximum, and there’s 272mm of clearance. Park mode drops the suspension to make getting in and out easier. On the move, the system works automatically to optimise performance and economy.

It copes well with small bumps and lumps, despite the range-topper’s vast 20-inch alloy wheels. The air-suspension isn’t the Jeep’s only party trick, as the Selec-Terrain traction control system improves off-road performance further.

It’s similar to Land Rover’s Terrain Response system, and allows you to choose from Sand/Mud, Sport, Auto, Snow and Rock presets. These fine-tune the ride height, throttle control, transmission, brakes, differentials, transfer case and electronic stability control to suit the conditions. Yet while the Cherokee can do anything the Land Rover can off-road, it crashes and bangs across rutted terrain where the Discovery 4 copes calmly. It’s not as refined as the Brit on the road, either.

The Jeep’s 3.0-litre V6 diesel provides ample performance, but it’s coarse at high revs. And, with only five ratios to choose from, the slow- witted auto can’t match the flexibility or response of its rivals’ six and eight-speed gearboxes.

Head into a bend at speed, and it’s clear that the Grand Cherokee generates less grip than its competitors, as its nose begins to wash wide of your intended line sooner than in either the VW or Land Rover.

Take a more relaxed approach, and this ceases to be an issue, although the Touareg and Discovery 4 both serve up more driver appeal. It’s also hard to ignore the Jeep’s inefficiency.

While it sits between its opponents in terms of CO2, with a 218g/km output, we achieved only 18.3mpg in our short test – easily the lowest here.

The Grand Cherokee is without doubt the brand’s best car yet, with sharp looks, strong performance, excellent off-road ability and lots of kit. But will that be enough for it to take top spot?

Chart position: 3WHY: New Grand Cherokee is not only better looking than before, it’s also more efficient, and its fresh platform should make for a more accomplished drive.