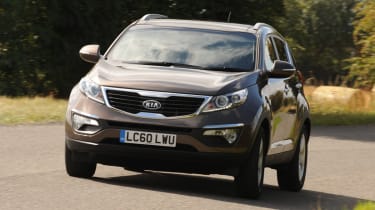 8
Kia set out to make the Sportage desirable, and it has done just that. The model’s sporty profile, glitzy exterior trim and eye-catching wheels seem to spark conversations at every stop.
Getting the styling right is no good if the rest of the car isn’t up to scratch, but the Sportage backs up its looks with all-round appeal. Jump inside, and the dashboard – particularly the striking centre console and stereo – is a million miles away from the no-nonsense approach applied to the Tiguan. The multifunction steering wheel looks great and works well, too. High-quality plastics, a huge amount of equipment and solid switchgear create a classy feel.
Video: watch CarBuyer's video review of the Kia Sportage
[[{"type":"media","view_mode":"content_narrow","fid":"68565","attributes":{"alt":"","class":"media-image"}}]]
Picking holes in the Sportage isn’t easy, but there is one obvious problem – and it’s a direct result of that striking exterior. Sit in the driver’s seat and rear visibility, especially over the shoulder, is poor. The car’s thick C-pillars and shallow windows bring a coupe-like feel to the inside, and this atmosphere is heightened at night when red illumination gives it a moody glow.
Despite the cosy feel, there’s plenty of space in the back and a healthy 465-litre boot. You don’t get the flexibility of sliding rear seats like you do in the Tiguan, and when you fold the rear bench flat the load area is compromised by the sloping roofline, but the Kia is still a practical family machine.
It’s capable off-road, too. The Dymax 4WD set-up directs power to the front wheels in normal driving to reduce fuel use, but as much as 40 per cent of the 2.0-litre engine’s torque is automatically sent to the rear to enhance cornering stability or improve off-road traction when conditions demand it.
The system is similar to the Volkswagen’s set-up (which sends 90 per cent of drive to the front wheels in normal conditions). However, Kia’s Stop&Go technology isn’t fitted to the 2.0-litre diesel, which explains its higher CO2 emissions.
The CRDi diesel is a strong performer. It’s neither as smooth nor as refined as the Tiguan’s punchy 2.0 TDI, but it is very effective, powering the Sportage from 0-60mph in 10.1 seconds – 1.1 seconds faster than its rival.
It also had the edge during our in-gear tests, but the differences are hard to gauge on the road, as the two cars are evenly matched. The Kia only struggles in corners, as its chassis simply isn’t as talented. Carry too much speed into a bend, and the front tyres lose grip before the Tiguan’s. Extra body roll adds to the drama.
This was also the case in our emergency braking tests. With plenty of nose dive and the odd wriggle through the steering wheel, we knew the Sportage had failed to match the Tiguan before even looking at the data logger; a stopping distance from 60mph of 38.9 metres was three metres longer than its rival’s. Elsewhere, the Kia’s light steering doesn’t have the precision and accuracy of the weightier Tiguan set-up.
In isolation the Sportage is thoroughly competent, but if you want sporty handling rather than racy looks, it has to come second best. The good news for Kia is that there’s more to this test than driving thrills...

Chart position: 1WHY: If you want to drive an eye-catching and car-like off-roader, then you should look no further. Korean manufacturer Kia really came of age when it launched the excellent Sportage.