It’s closely related to the Fiat, but can smallest Ford set itself apart? 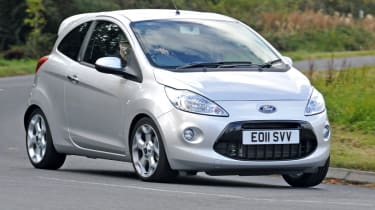 8
The original Ford Ka was in dealers for 11 years and was a real success story, selling in huge numbers. So the second generation carried a weight of expectation on its shoulders when it arrived in 2008.
It doesn’t have the pure Ford genes of its forebear, though, as it shares its underpinnings with the Fiat 500 and is produced in the same factory in Poland. And while tight margins at this end of the car market make the joint venture understandable, Ford drew the short straw for styling.
Look at the Ka from any angle and it’s clear the designers were limited by having to craft Ford features over dimensions that were meant for the retro 500.
Even the Fiat-style key is a giveaway, and inside you can see that the gearlever and switches are all in the same position as in the 500. But while the architecture is the same, the Ka has a unique dash frontage. Crucially the fit and finish of the trim lower down in the cabin is better, although
quality still falls short of the Kia’s high standards.
There’s limited stowage space and, like the Fiat, the Ford only has room for two in the back. But its 224-litre boot is the largest of our trio.
Under the bonnet, Ford has fitted its own 1.2-litre Duratec engine. Unfortunately, that means the Ka is at a distinct disadvantage in this company.
It was the slowest car in all our performance tests – easily explained by the fact that the breathless four-cylinder engine produces only 68bhp and has the lowest torque output here.
As a result the Ford is much less responsive than the Fiat. It took an extra 7.4 seconds to go from 50-70mph in fifth and was 1.5 seconds slower in the sprint from 0-60mph, with times of 21.5 and 13.3 seconds respectively. Even the Kia has better in-gear response. Add the highest CO2 emissions, and the Duratec engine is simply outclassed.
Fortunately, the Ka’s handling is more accomplished. Working with the same chassis as the Fiat, Ford engineers have sprinkled some dynamic magic over the car by tweaking the suspension and the electric power-steering.
It feels similar to the 500, but there are a few differences. The Ford has sharper responses and more naturally weighted steering. Both our test cars had 16-inch wheels (standard on the Ka Metal) and place plenty of rubber on the tarmac, so grip levels are closely matched. Ride quality is similar, but the Ford remains more composed on even surfaces.
At motorway speeds, the Ka lacks the Picanto’s refinement, but it’s still very comfortable for a small car. So it’s a shame that its engine doesn’t have the power and enthusiasm to make it really entertaining on the road.
Plus, like the Fiat, it can’t match the Kia for standard equipment – the fact there are only two airbags is disappointing. Higher emissions mean owners will have to pay for road tax, too.

Chart position: 3WHY: Entry-level Ford is a very popular choice and comes in a host of trims. We test the new special-edition Metal.