Newcomer claims to offer all the thrills of coupe as a cabrio. We test the Carrera S 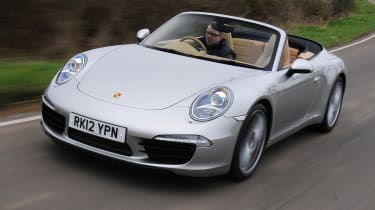 8
Cabriolets always divide opinion. Lots of owners love the image and open-top thrills, while keen drivers detest the handling and style compromises these cars demand.
Nowhere has this argument been more vigorously debated than with the Porsche 911. But whichever side of the fence you sit on, it’s fair to say the Cabriolet has never been the traditionalist’s choice. Part of the reason has been the difficulty of blending a fabric roof into the 911’s unmistakable looks. Thankfully, that’s something Porsche has finally managed to achieve with the new car.
Viewed in profile, the taut fabric hood forms a curvaceous profile that’s near-identical to the coupé’s. There are no seams or creases and even the heated glass rear screen is bonded flush into the material.
With the roof up, there’s barely any more road and wind noise than in the tin-top. Plus, the hood folds in just 13 seconds, at speeds up to 35mph, to reveal a high-quality cabin that trumps the R8 for upmarket appeal.
The traditional cowled Porsche dials take pride of place, while the high-class switchgear is located along the rising centre tunnel, placing the focus on the driver. Even better, a wide range of wheel and seat movement delivers a perfect driving position, plus there is noticeably more space than in the R8.
And with a deep nose boot and tiny rear seats, the 911 is also more practical than the Audi. However, this isn’t crucial in this class: it’s the experience from behind the wheel that matters – unsurprisingly, Porsche has focused hard on this. The newcomer has 15bhp and 20Nm more than the outgoing car, at 395bhp and 440Nm, while the body’s torsional rigidity has increased by 18 per cent.
These figures are even more impressive when you consider that, when equipped with the seven-speed manual box, the Carrera S emits 229g/km of CO2 – that’s 108g/km less than the manual R8.
The end result of all this engineering focus is instantly clear. With its standard Porsche Adaptive Suspension Management (PASM), the Cabriolet rides better than ever, while the wider track improves stability at speed. Add the best electromechanical power-steering we’ve tried, and it turns in beautifully, plus is more agile than the outgoing car. In fact, you’ll be hard pressed to notice a difference over the coupé, as the soft-top feels impressively rigid.
However, the R8 excels in these areas, too, and rivals the Porsche’s sense of occasion with its evocative open-gate manual gearbox and thunderous V8 exhaust. Not that the 911 lacks aural appeal – our car had the £1,772 sports exhaust, which sounded wonderful. And the dual-clutch PDK is a far better transmission than the outdated R tronic auto in the Audi.
Our Porsche also benefited from the £1,084 Sport Chrono Pack Plus, which features a very effective launch control system. As a result, it rocketed from 0-60mph in just 4.1 seconds – a full six-tenths faster than the R8. The Audi narrowly pipped the 911 in our in-gear tests, although neither car will leave you wanting when it comes to performance.
The 3.8-litre flat six comes into its own around 3,500rpm, where it delivers savage acceleration all the way to the 7,500rpm red line. Superb traction means the 911 punches out of corners, while body control is similarly impressive – helped by the Sport Chrono Pack Plus’s dynamic engine mounts, which virtually eliminate movement of the flat-six to improve stability in corners.
Still, for all this dynamic focus, the car is a talented all-rounder and a comfortable cruiser. The Porsche is also cheaper to buy in basic form, and as it emits less CO2 than the R8, it’s a cheaper company choice. As with the Audi, you can easily get carried away with the expensive options list. But even this can’t detract from what’s clearly the best 911 Cabriolet ever. The R8 definitely has a fight on its hands.

Chart position: 1WHY: The Cabriolet has been a big part of the 911’s success. Latest 991 model promises open-air fun with greater fuel efficiency.