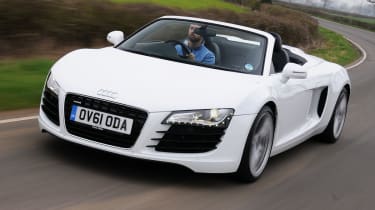 8
In the world of fashion, everything changes from one season to the next. Last summer’s smash hit is usually old hat 12 months down the line. But that’s never been the case for the Audi R8.
The drop-top Spyder version was the height of fashion when it debuted in 2010, and while it’s no longer the must-have accessory for car-loving sun worshippers, it still generates more interest than the sober-suited 911. When we pulled into a garage forecourt to fill up, all eyes were on the Audi – nobody even appeared to notice the all-new 911 Cabriolet parked behind it.
Advertisement - Article continues below
Self-conscious customers will relish the more conservative character of the Porsche, but both of these cars are designed to get you noticed. And the eye-catching styling extends to the R8’s interior. While the 911 follows previous Porsches with a straightforward layout, the R8 is unlike any other Audi.
The manual gearbox has a unique exposed gate, so shifts are accompanied by a distinctive click-clack sound. Add knurled aluminum switches, alloy-rimmed instruments and a swooping design, and the Spyder’s cabin lives up to the promise of its exterior.
Advertisement
Advertisement - Article continues below
Quality is first-rate, but the Audi trails the 911 for space. With its fabric hood in place, tall drivers will feel hemmed in, and there are no back seats, so stowage space is restricted to a few small lockable cubbies and the front boot.
The R8’s roof is also slower to fold than the 911’s, and buffeting is more of an issue with it lowered. The narrow rear window doubles as a wind deflector when the roof is down, but it’s too small to be really effective.
Advertisement - Article continues below
However, it can be lowered when the roof is in place – to turn up the volume on the V8. The 424bhp engine pulls strongly from low in the range, all the way to its 8,000rpm cut-out. And once the needle is above 3,000rpm, the soundtrack, and acceleration, is spine-tingling as its low-end burble gives way to a throaty NASCAR roar at higher revs.
The Audi has quattro all-wheel-drive traction, but isn’t as quick off the line – as the Porsche’s PDK gearbox benefits from a clever launch control system that provides incredibly quick getaways. But once the cars are up and running, the R8 has the edge.
It blasted from 0-60mph in only 4.7 seconds and raced from 50-70mph in fifth gear in 4.9 seconds – that’s seven-tenths faster than the 911.
The rest of the driving experience is equally accomplished: while the 911 is more refined and responsive, the Audi is still huge fun. Our car had optional Magnetic Ride suspension, which does wonders for ride comfort and improves body control in Sport mode.
The pedals are perfectly placed, while the brilliant handling, open-gate gearshift and throbbing V8 provide a real sense of occasion. Driving the R8 Spyder is an experience to savour.

Chart position: 2WHY: Stunning R8 Spyder still sets the standard for drop-top glamour. Yet it’s more than just a pretty face, with a powerful V8 engine and sharp drive.