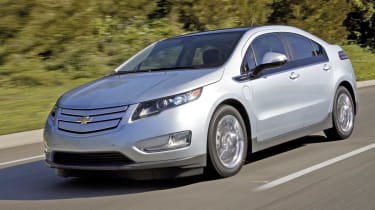 As efficient as a full-electric car, but with the practicality of a petrol-powered model, the Volt is a massive step forward. Although it seems expensive, pioneering technology always is, and the savings at the pump should help make up for this. On top of that, it’s smooth, fast, comfortable and easy to drive. Don’t dismiss this Chevy as merely another hybrid – it’s the most important model for years.

At last, electric cars are going mainstream! The Chevrolet Volt promises to be the first affordable, mass-production battery vehicle to go on sale. And Auto Express was among the first to get behind the wheel of a showroom-ready model.

Being a plug-in hybrid, the Volt avoids the normal pitfall of an all-electric car – limited range. When the batteries are running low, a 1.4-litre engine kicks in. But it doesn’t drive the wheels; instead it charges the battery. If it’s a formula you’re familiar with, that’s because the mechanically identical Vauxhall Ampera will hit UK showrooms late next year.

The 150bhp motor, coupled to the front axle, draws power from 300 batteries packaged inside a T-shaped box that runs through the belly of the car.

The cells are water-cooled to prevent overheating problems.

Incredibly, only half the power produced is used for propulsion. The rest is split between the air-con, brake servo and power-steering systems.

The 0-62mph sprint takes 8.5 seconds, and top speed is 100mph – impressive figures when you consider the Volt’s 1,700kg kerbweight.

Turn the ignition key, and the starter button glows green. Push it, and the central display loads up in a similar way to a computer game – a green bar chart on the left shows your remaining range, and a green ball on the right indicates how economically you are driving.

The first sign of life is when you push the accelerator pedal, and the Volt scurries off at a surprising rate. All 370Nm of torque is available from 0rpm of course, which means the traction control is called upon when moving off the line in damp conditions.

On the move, it’s eerily quiet, with wind noise, tyre roar and suspension clunks the only sounds you can hear. Chevrolet claims the first US cars, due for delivery in November, will be even more refined. The driving experience has clearly been tuned for comfort rather than speed. Whereas the Astra – with which the Ampera and Volt share parts – feels composed in bends, the Volt suffers from body roll. However, it’s more comfortable at all other times.

If you do feel the need to press on, though, a sport mode, activated via a button on the dash, releases 20 per cent more power from the batteries for swifter progress.

Chevrolet claims the Volt has an electric-only range of around 40 miles – that’s after a two to four-hour charge from a mains socket. Yet this relies heavily on relatively warm ambient temperatures and a light right foot. But the short range is less of a problem than you’d think.

As soon as the batteries run below 30 per cent charge, the 1.4-litre petrol engine fires up and settles to a 1,600rpm idle, while it tops up the power as you continue to drive. On steep inclines, the motor can reach as much as 4,000rpm to meet the battery demands. Once charge hits 85 per cent or above, the engine turns itself off and you continue on your way.

When the Volt arrives here in spring 2011, prices will start at around £35,000. There are clearly more entertaining ways to spend your money, but that would be missing the point.

The average daily distance covered by European motorists is around 20 miles, according to Chevrolet – so if you only ever use the Volt for short trips, visits to the petrol station forecourt will be a rare event.