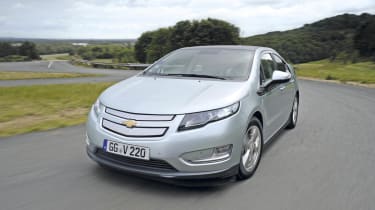 Impressive as the latest electric cars are, they aren’t practical for most people due to their limited range. While the Volt is expensive, it solves this problem, thanks to an on-board petrol-powered generator. It means owners never have to worry about being stranded, leaving them free to enjoy the car’s relaxed driving character, decent practicality and cheap running costs. Why didn’t anyone think of this sooner?

The Chevrolet Volt has charged into Britain – and Auto Express was first to sample the pioneering newcomer on home soil.
Although our car was a European model, little will change when the right-hand- drive version goes on sale  here in March next year.
The Volt claims to solve the main concern us Brits have with electric vehicles: range. Unlike other battery-powered vehicles, which can only be recharged via an electrical supply, it has an on-board petrol generator to top up batteries when they run low. As a result, there’s no threat of being stranded – you can pull into any fuel station and fill up with petrol.
Most of the time you’ll never need to, though. A seven-hour charge from a normal three-pin plug socket gives the Volt’s  16kWh, lithium-ion batteries enough juice for around 40 miles of driving. And studies show that’s sufficient range for the majority of daily commutes.

But in contrast to other  electric cars, the range-extending function means long motorway journeys are also possible. With the 1.4-litre generator providing all the electricity, the new car  averages about 40mpg.
While this is below what you’d expect from your average diesel, over the standard European fuel economy test, the Chevrolet is still far more efficient. It’s capable of averaging 176mpg, and is a lot cheaper to run than a regular car.
Thankfully, it never feels  anything other than normal to drive. The only difference is its near silence, and the immediate thrust of its 150bhp electric motor. In Sport mode, the Volt can sprint from 0-62mph in  only 8.5 seconds, and on to  a top speed of 100mph.
Drive it quickly, though, and the petrol generator will soon kick in to recharge the batteries. But when it does, you’ll hardly notice. Most of the time it whirrs away at 1,600rpm. Only on steep inclines, and when you’re trying to overtake, do the revs rise to around 4,000rpm and the  noise becomes intrusive.
Then there’s the handling. Even though the Volt is built on the same platform as Vauxhall’s Astra, its electrical components increase the weight to 1,715kg. Unsurprisingly, this affects agility. Yet does a bit more body roll and slightly slow steering really matter on a car such as this? No, it doesn’t. Actually, a more relaxed approach suits the nature of its eco-friendly powertrain anyway, and the supple suspension is more suited to the place where the car will be used most: around town.
Here, the sci-fi styling will  certainly turn heads. The inside is suitably futuristic, too, with  a couple of large colour LCD screens delivering a range of graphical information about how power is being distributed, along with battery life, to the driver.
Practicality is also impressive. Visibility is good, the seats are comfortable and there’s plenty  of space in the boot. The only drawback is that the batteries run down the centre of the car, similar to a big transmission  tunnel, which makes it  strictly a four-seater.
Of more interest to most  buyers will be the price, though.The Volt is expected to weigh in at around £28,000, after the £5,000 Government rebate. That’s £2,000 more expensive than the Nissan Leaf. However,  in reality, this is a small price to pay for never having to suffer the one thing that blights electric  car ownership: range anxiety.
Share this on TwitterShare this on FacebookEmail