GM's revolutionary plug-in hybrid is here and but can it deliver a drive to match its technology? 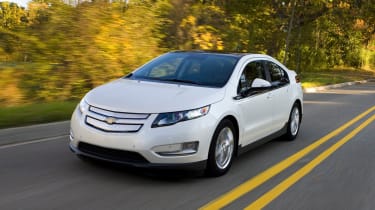 The Volt’s technology is complex but its appeal from behind the wheel is simple. Smooth, silent and quick in electric mode, plus the range-extending engine means this is an electric car you can use everyday. Battery packaging means passenger and luggage space is slightly compromised, while the ride is firm and the styling won’t be to all tastes. However, with an eight-year/100,000 mile battery warranty Chevrolet are confident of their new technology, and while efficient diesel and conventional hybrid rivals still make a strong case for themselves, the Volt is the most convincing plug in electric car we’ve driven to date.

The Volt is the world’s first mass-produced electric vehicle claiming to offer the range and everyday usability of a conventionally-powered car. We went to its global launch in Michigan to put these claims to the test.

Serene and silent running combined with instant torque and super smoothacceleration, on the road it’s a revelation. Chevrolet claims thatdepending on terrain, driving style and temperature you can run forbetween 25 and 50 miles on a battery power alone - We did 30 miles before the smart digital dash confirmed that our battery was running low. With a 35-litrepetrol tank and the engine switched on this extends the range to up to310 miles.

Impressively, the transition to range extendingmode is seamless and with the engine usually running at optimum andconstant revs, during most driving situations you don’t notice it. Sofrom behind the wheel the Volt still feels just as smooth.

Dynamically,the Volt’s chassis is conventional and while any judgment on handlingwill have to be reserved until its driven on European roads, theChevrolet has decent body control and the electric power steering isdirect enough to inspire confidence. Unfortunately, brake pedal feel isartificial and the rigid suspension doesn’t isolate road imperfectionsvery well.

Inside, the cabin layout is straightforward, and dominated by the large central panel and its touch pad style buttons. Materials are solid but uninspiring, while headroom in the back is tight and with the central spine of the T shaped battery pack running down the middle of the car, the Volt only has two individual rear seats.