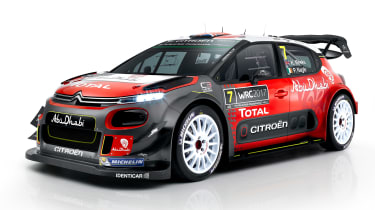 This is the Citroen C3 WRC, the definitive version of the rally car that will shoulder the hopes of Briton Kris Meeke in the 2017 World Rally Championship.

Unveiled at an event in Abu Dhabi, the all-new machine has been developed to rallying’s new regulations, which allow a bigger turbo restrictor for increased power, an active centre differential for improved handling and more extreme aerodynamics. The last of those changes is clearly visible in the undisguised car, with a huge double-element rear wing and aggressive vanes on the C3’s front bumper. 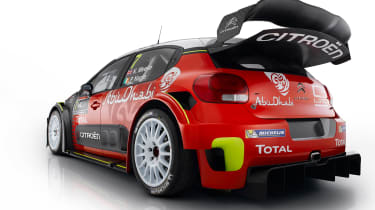 The C3 WRC marks Citroen Racing’s full-time return to the series after a spell when the French brand was concentrating on World Touring Cars. Apart from Meeke, the team has signed up Frenchman Stephane Lefebvre and Irishman Craig Breen, plus Sheikh Khalid Al Qassimi. It plans to run two C3s on the opening rounds but by the time the WRC arrives in its ‘European season’, from Portugal in May, Citroen should be fielding three or four C3s in each event.

Meeke has spent much of 2016 developing the car - although his limited seven-rally programme still allowed him to claim two victories. Citroen Racing says the C3 has racked up more than 9,500km (6,000 miles) of testing, everywhere from France and Finland to Portugal and Wales. 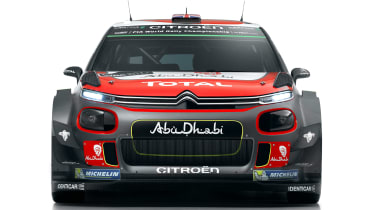 Citroen Racing team boss Yves Matton said, “The previous World Rally Cars were often criticised for lacking aggressiveness at certain points. I think rallying remained spectacular in terms of the scenery and backdrop of the events, but the cars undoubtedly lacked a wild, crazy side. I think we'll see that again now. I hope that the changes will stimulate interest among younger fans and will have a positive effect on the championship.”

He described Meeke as “vital” to the programme and said, “We needed a leader, who had plenty of technical experience and knowledge in terms of development. Kris has been developing racing cars for the PSA Group for more than ten years. He is a trained engineer and that means he has been able to provide detailed analysis at certain points. He is undoubtedly one of the main reasons we were able to stick to the schedule and meet our goals.”

Meeke’s main rivals for the 2017 WRC title will be four-times champ Sebastien Ogier, who has joined Cumbria-based M-Sport to drive a Fiesta WRC, Belgian Thierry Neuville at Hyundai and Finnish star Jari-Matti Latvala, who will drive Toyota’s all-new Yaris WRC. The season starts on 20 January with the famous Rallye Monte-Carlo.

Plans for a halo Citroen saloon are accelerating, as the brand readies for a possible reveal at the 2021 Shanghai Motor Show
Visit New all-electric Citroen Ami city car revealed

The electric Citroen Ami city car has a range of up to 44 miles, and can be driven by 14-year-olds without a driving license
Visit Citroen ami ride review